England vice-captain Heather Knight reflects on the one-day international phase of the multi-format Women's Ashes. The series continues with a one-off Test at Canterbury which begins on Tuesday, 11 August. You can listen to commentary on every ball of the series on the BBC.

With all the waiting and build-up finally over, it was time to don the dark blues and kick off our Ashes campaign at Taunton with the first one-day international.

It was a massive honour to pick up my 50th cap, made all the more special being in the West Country at a ground where I'd spent hours training as a kid with the Somerset academy.

There's always a few nerves kicking around at the start of such a massive series, but we started brilliantly with the ball with Anya Shrubsole and Katherine Brunt setting the tone. They've both bowled excellently in all three ODIs and have been unlucky not to get more reward in the wickets column.

Nat and Lydia then combined excellently with the bat to see us over the line, a brilliant start.

The convoy then made its way to Bristol for the next match. Lydia and Laura Marsh and I decided to break away from the convoy system on the morning of the match.

This proved to be an error, with chief navigator Marshy taking us in the completely wrong direction. Luckily we didn't lose too much time!

The Australians came back hard at us in Bristol, as we expected, and made us pay for not taking a few tough chances in the field and not staying in the game long enough with the bat.

How do cricketers cope with rain delays?

Being a cricketer in England, one skill that's non-negotiable in your cricketing armoury is an ability to amuse yourself during a long rain delay. We found this out on a damp squib in Worcester three days later.

It's always tricky when you've got the game in the back of your mind, but it's quite important to be able to relax so you're ready to switch on quickly if the rain subsides. It's fair to say there are a variety of characters in our dressing room and everyone has their own ways of coping with the rain.

Captain Charlotte Edwards can be seen sighing after reaching in her pocket for her phone several times an hour, only to realise it's not actually there because of the International Cricket Council's anti-corruption measures which mean that all phones have to be removed from the dressing room.

Katherine Brunt is usually making a large amount of noise somewhere, whether it is in celebration of a game she's found - such as trying to putt a golf ball into an empty coffee cup - or if she's arguing that she's losing at cards because everyone else is cheating. (Brunty's a terrible loser!).

The Hoof (Anya Shrubsole) will often be frowning at Katherine making so much noise as it distracts her from her Sudoku. I'm usually found filtering between reading the paper, trying and failing to make people laugh, playing cards or doing some running bat repairs.

Despite the weather, it was good to see so many supporters stick around at Worcester and we were grateful to spend a bit of time signing a few autographs and chatting to the crowd.

The support we've had at all three of the grounds has been absolutely amazing, so thanks to everyone who has come along to support us, it really has made a difference.

It's also great to see so many young girls coming along to watch. As a kid I knew very little about women's cricket so to see the next generation being able to access it so easily, thanks to some great coverage we've had, is awesome!

Luckily we had a reserve day at Worcester, but unfortunately we were well below par and Australia outplayed us in all three disciplines. Meg Lanning and Ellyse Perry have really stepped up for them in the ODIs so it's key that we find a way to counter them in the rest of the series.

We were massively disappointed in losing the last two games and it's important that we're honest as a squad with what went wrong, but it's even more important that we move on quickly and come back stronger for the Test.

Sometimes you have bad days in sport, it happens, but it's what you do next that counts and we will be better come 11 August in Canterbury. 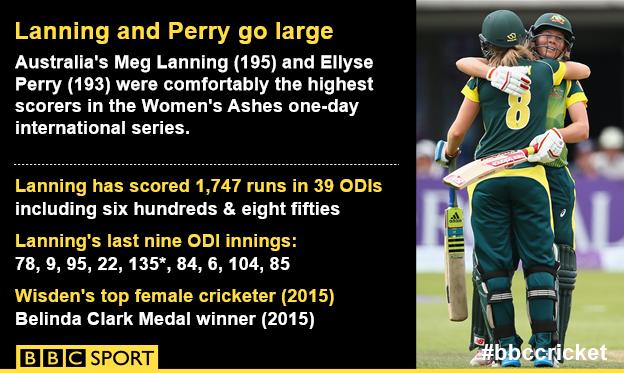