Captain Alastair Cook has challenged England to "make history" by winning the Ashes at Trent Bridge this week.

The fourth Test of the five-match series starts on Thursday, with England leading Australia 2-1.

"There is another opportunity for someone to make their name in the history of English cricket," Cook said.

With seamer James Anderson absent with a side strain, England have Mark Wood, Liam Plunkett and uncapped left-arm seamer Mark Footitt in a squad of 14.

England must win the series to regain the Ashes, while Australia - as holders - need only draw to retain them.

Cook added: "Because of the way the series is poised, if someone scores a big hundred or takes six wickets and helps England win the game, the name will be etched in history forever - that's the opportunity we have as a side."

England beat Australia by eight wickets inside three days last week at Edgbaston to restore their series lead after Australia's victory at Lord's.

Cook said: "The atmosphere last week at Edgbaston was just fantastic, the crowd at the end was just brilliant and we were taking as a group about how much we enjoyed it.

"We earned the right to get the crowd on our side. Hopefully we can do the same this week and the crowd can be the 12th man." 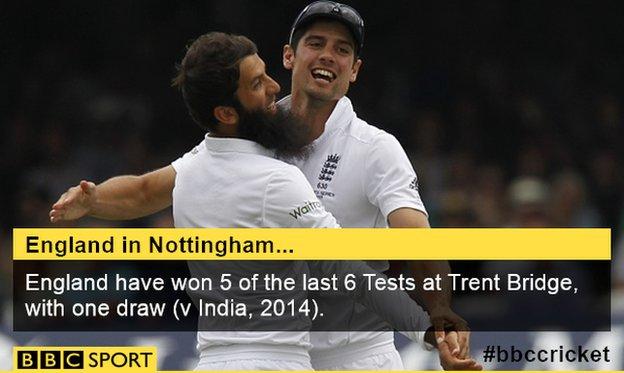 Anderson, who he is using an oxygen tent in a bid to be fit for the final Test at The Oval starting on 20 August, is set to be replaced by Wood.

The Durham seamer, 25, took 3-93 on his Test debut against New Zealand at Lord's in May and claimed 14 wickets in four Tests before missing out at Edgbaston with an ankle problem.

Wood is likely to form a four-strong seam attack containing Stuart Broad, Steven Finn - man of the match at Edgbaston - and Ben Stokes.

"He is fully fit and he is raring to go," said Cook said.

"Everything he's been asked to do he's come through with flying colours. He's really excited for the opportunity he's got."

The Australian view - Clarke hits back

Australia skipper Michael Clarke has made only 94 runs in six innings in the series, but used his column in the Daily Telegraph to respond to criticism of his commitment.

At Wednesday's pre-match news conference he said: "There's no doubt I'm coming to the back end of my career - I'm 34 years of age.

"There were question marks about my will to be successful and obviously I am questioning that.

"If I didn't want to be here I wouldn't be doing the work I'm doing.

"I've still got that love, desire and passion and I'm still trying to get better. 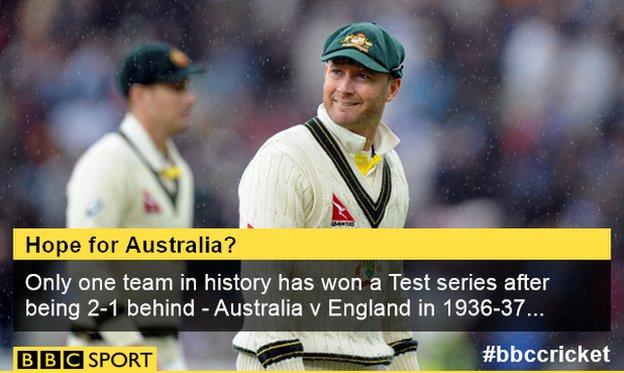 "I'm still very confident because of the hard work I'm putting in that I can make runs. Other people might not have confidence in me but I certainly have still got that self-belief."

Clarke has lost 10 Tests in England - a record for an Australia player - but he said: "I still believe if we play our best we can win this Test match and the series.

"The series hasn't been really close. One team has dominated and gone on to win that Test match."

Clarke, who is not a selector, said he would "probably give my opinion" on the starting XI, adding: "Whether it be with bat or ball we need to set the game up better.

Left-hander Shaun Marsh, who averages 35 from 14 Tests, could make his first appearance of the series at the expense of Adam Voges, who has scored 73 runs in five innings.

England's first three wins of 2015 have each been followed by a defeat, and after victory at Edgbaston that sequence now spans seven matches.

"If someone can guarantee me nine I'll carry on with the win-loss-win-loss thing," Cook said.

"It's a good time to change it now but it's hard to put a finger on why we have done this.

"We have never backed up - whether it has been fatigue after throwing so much energy into the previous game, bowling speeds have been down in the next game and all of our defeats have been in the second game of the back-to-back.

"The different scenario here is that because Edgbaston finished in three days we have had a lot more time to recover.

"It would be a great time to stop being the most consistently inconsistent team."

Trent Bridge has traditionally favoured swing bowlers but last year it was rated "poor" by the International Cricket Council as 1,344 runs were scored as England drew a disappointing contest with India.

England have won 21 and lost 16 of their 59 matches in Nottingham since 1899, while Australia have won seven, lost five and drawn 10.

Trent Bridge hosted the opening Ashes Test in 2013, when teenage debutant Ashton Agar made 98 at number 11 for Australia but England won a tense encounter by 14 runs.