Ben Stokes was England's driving force on Friday as they set themselves up for an Ashes-winning party.

The Durham all-rounder has always had pace and energy in the field, and we've seen glimpses of his prowess with the bat, but his bowling has lacked control.

Today, however, he bowled with brilliant control, swinging the ball both ways on a full length and luring the Australian left-handers to nick outside off stump.

To be a true all-rounder you have to contribute in every aspect of the game.

In this match, Stokes missed out with bat, but his bowling was brilliant and his fielding - one of England's strongest suits throughout the series - has been something else.

He took an outrageous catch to remove Adam Voges yesterday and another superb one today at point to account for Steve Smith.

Stokes has a lot in common with the great England all-rounders Sir Ian Botham and Andrew Flintoff, even though he has some way to go to match their achievements. All three are enforcing cricketers who stamp themselves on the game. They don't over-think it, they just do it.

All-rounders always want to be involved. Whereas a fast bowler will normally retreat to long leg, all-rounders often field in the slips, putting themselves right in the heart of the action. 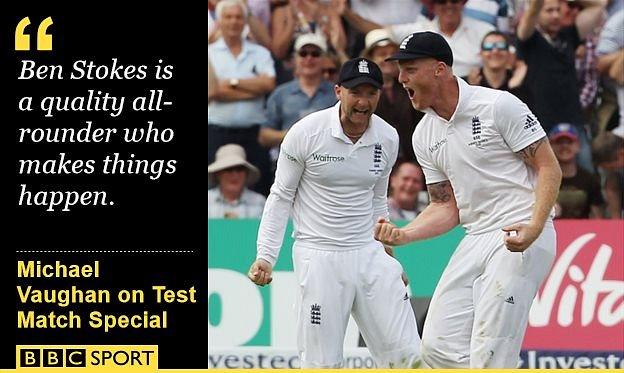 In hindsight, the ironic send-off Stokes received from West Indies batsman Marlon Samuels when he was dismissed in April probably did him some good. It embarrassed him and made him realise that sledging is often a waste of energy.

The Stokes you see today is entirely focused on his cricket. One day he might even thank Marlon for what could be a turning point in his career.

From a player on the road towards Test greatness, to another whose days at the top appear to be numbered.

Australia captain Michael Clarke is grotesquely out of form, and although he fought desperately hard on Friday afternoon, he didn't produce the miracle innings his team so badly needed.

We've been there many times with England. After defeats as crushing as this one, people do lose their jobs and Clarke will be looking over his shoulder.

He has been a magnificent servant for Australian cricket, but this will be his fifth Ashes defeat and all careers do come to an end.

While Clarke will no doubt be dreading tomorrow, England fans with tickets for Saturday at Trent Bridge can look forward to celebrating something really special.

They might only see three balls of cricket, but they will see England win the Ashes - and that is something that no-one could possibly forecast at the start of the series.

Come and get the party started.