Australia captain Michael Clarke will retire from international cricket at the end of the current Ashes series.

The 34-year-old saw his team surrender the Ashes after losing to England by an innings and 78 runs at Trent Bridge.

He averages only 16 from eight innings and Australia are 3-1 behind with one match left at The Oval on 20 August.

"I certainly don't want to jump ship and leave the boys now. I'll play the last Test, give it one last crack, but the time is right now," Clarke said.

This summer's Ashes defeat is the fourth he has endured playing in England.

He took over the Australia captaincy from Ricky Ponting in March 2011 and has presided over 46 matches, winning 23 and losing 16.

In January last year Australia whitewashed England 5-0 when Clarke scored two centuries and averaged 40.33 in the series, but since March 2014 the captain's last 18 innings have produced 388 runs.

Clarke, who stepped down from one-day internationals in March, revealed he had decided to retire from Test cricket on Friday evening.

"I felt my performances weren't as good as I wanted them to be," he said.

"The decision is never easy. I started playing this great game at six years of age. I'm 34. I wish I could play for another 30 years."

Australia's series defeat in their fourth successive Ashes loss away from home, was their worst sequence of results in England since 1896.

Though they recovered from losing the opening Test in Cardiff with a big victory at Lord's, Clarke's men suffered heavy defeats at Edgbaston and Trent Bridge.

"Alastair Cook and the England team deserve a lot of credit - they've shown us how to execute good swing and seam bowling," said Clarke. "It's not for want of trying but the boys have been beaten by a better side..

"England when they've had momentum have grabbed it with both hands and ran with it. Once you find the edge you need to hang on to those chances and England have done that really well."

England captain Alastair Cook: "To Michael, from the England team, you were a fantastic player, fantastic leader. You should be remembered as a great captain."

Former England captain Michael Vaughan: "I can completely understand Michael Clarke's emotions. It just hits you that you're not going to play this game that you've played since you were a kid. They arrived here as clear favourites and you question yourself as a captain - he's clearly had so many things in his mind. It wouldn't surprise me at the Oval if he got a few."

Former Australia pace bowler Glenn McGrath: "I was there when Michael Clarke made his debut in Bangalore. He has been a big player for a long, long time and his average of about 50 is exceptional at Test level. I think he's made the right decision - he's going out on his own terms. He's a very strong character and I think he'll get plenty of support at the Oval."

Ex-England spinner Graeme Swann: "Congratulations to Michael Clarke on a brilliant career. He's the best player of spin I bowled at and a good bloke to boot." 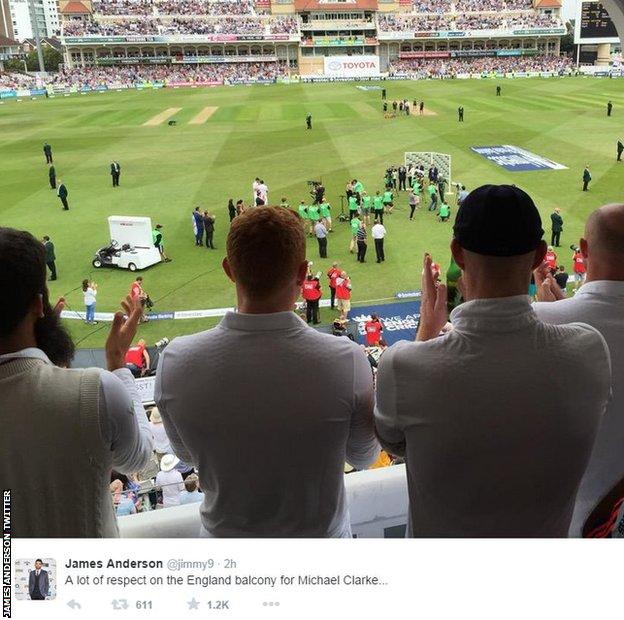