England's remarkable Ashes success is a great achievement for the team, and a huge personal triumph for captain Alastair Cook.

I've been tracking his path from the start of the whitewash series down under to today and there have been plenty of bumps along the way.

His style of captaincy came under relentless fire as he was accused of being reactive rather than proactive and his batting form suffered badly as a result. It has been a rough time but what has always shone through is his resilience.

I suggested to Cook at Lord's that the constant scrutiny over his captaincy may have actually helped him to become better.

He disagreed, but I think it's still a valid question, given the incredible improvement we have seen in this series.

He has led this team brilliantly and totally out-thought his Australia counterpart Michael Clarke, who has long been considered one of most innovative captains in world cricket.

His field placings and bowling changes have been sharp, and at times he has been ruthless. 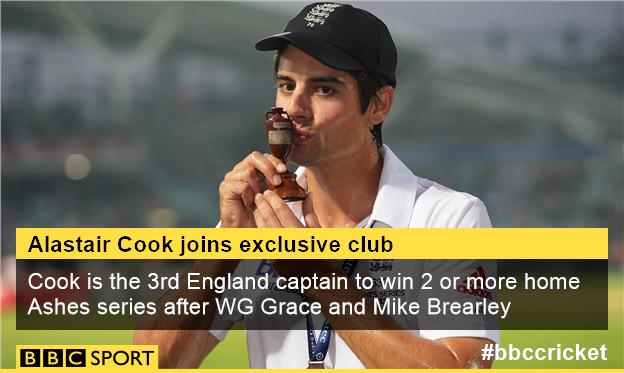 On Saturday, for example, it was some call not to open the bowling with Stuart Broad, who had the opportunity to complete a 10-wicket match haul at his home ground to win the Ashes.

Instead, Cook chose to go with Mark Wood and Ben Stokes, who had used the conditions so well on Friday, and the decision paid off as England took the last three Australia wickets inside 39 minutes.

The three-day victory completed a staggering turnaround, not only for Cook, but for a team that looked so listless during that heavy defeat by West Indies in Barbados in May.

That set off a chain of events that saw Peter Moores and Paul Downton fired and Kevin Pietersen launch a bid for a recall before Andrew Strauss put paid to that possibility on his first day as England director of cricket.

It certainly did not feel like the ideal platform for an Ashes-winning summer.

I think England have a lot to thank New Zealand for. They came here and played attacking, positive cricket and England have tried to emulate them.

They have thrown off the shackles and played the type of attacking cricket that wins you matches - and series.

It is amazing how quickly the wheel turns. Only 18 months ago, Australia looked invincible, but suddenly Clarke is quitting and it looks like several others may also be retiring or set to lose their places.

England, on the other hand, look a settled unit, with Jimmy Anderson possibly the only player whose longevity you would question.

Joe Root is blossoming into a top-class international batsman. It can only be a good thing that it will now be some time before he gets burdened by the captaincy.

Ben Stokes bowled brilliantly here, swinging the ball both ways at pace, while Mark Wood looked at his best as he claimed the final two wickets. When you add in Anderson, Broad and Steven Finn, it's a healthy state of affairs.

The two areas of concern are the spinner and the opening batsman, as coach Trevor Bayliss has identified.

To have any chance against Pakistan in the autumn tour in the United Arab Emirates, England will need a front-line spinner taking wickets, so it may be that Moeen Ali moves up to open and Adil Rashid is brought in.

They have talked a lot about unity and they certainly seem a genuinely contented bunch of players.

Under huge pressure they did not buckle. They showed great resilience to overcome the horrors of Lord's and bounce back at Edgbaston and Trent Bridge.

Their celebrations are richly deserved.