England's bowlers were made to toil on the opening day of the final Ashes Test as Australia lifted their hopes of a consolation win with an impressive batting display.

Put in to bat by England captain Alastair Cook, the tourists progressed to 287-3 at The Oval.

David Warner scored 85 and Chris Rogers 43 as the openers put on 110 for Australia's first wicket.

Captain Michael Clarke, who was given a guard of honour by the England team when he walked out to bat in his final Test, could only make 15.

But an unbroken century stand from Steve Smith (78) and Adam Voges (47) ensured the tourists were on top when bad light ended play.

After the storm… the calm

When Cook won the toss and chose to field on an overcast morning, he was no doubt hoping for a repeat of the past two Tests at Edgbaston and Trent Bridge.

There, England bowled out Australia for 136 and 60 respectively to take a 3-1 series lead and regain the Ashes with one Test to spare.

But with the pitch and weather doing little to assist England's bowlers, Australia were much more disciplined with the bat and negotiated the morning session without losing a wicket.

Only 19 runs were scored in the first hour of play, but Warner and Rogers found their range either side of lunch to lay down a platform for a big score.

Their efforts set the tone for a far more characteristic day of Test cricket, following the barely believable dramas of the past two Tests.

No fairytale for Clarke

After Rogers had nicked a Mark Wood away-swinger, Warner prodded forward at Moeen Ali and edged to slip to fall 15 runs short of a hundred.

That was the cue for Clarke to walk out to bat in his 115th and final Test, in scenes that evoked memories of Australia legend Don Bradman's final Test at the ground in 1948.

Sporting a black armband in memory of his former team-mate Phillip Hughes, who died after being hit on the neck by a cricket ball in November, Clarke was clapped to the crease by England's players and shook hands with Cook before taking guard.

Despite only averaging 16 in the series, he looked relatively relaxed as he moved into double figures, but a push outside off stump cost him his wicket.

As bowler Ben Stokes and England celebrated a caught behind, Clarke sent the decision for review, but the snickometer detected a clear edge and the tourists' skipper had to go.

Australia's selectors reversed the decision they had taken in the previous Test as Shaun Marsh was dropped in favour of brother Mitchell.

An injury to Josh Hazlewood prompted a change in the bowling department as veteran Peter Siddle was surprisingly recalled for his first Test of the series ahead of 22-year-old Pat Cummins, who was in line for his second Test appearance, four years after his first. 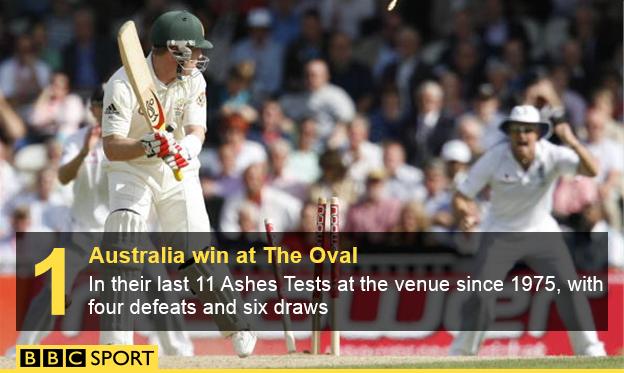 England, meanwhile, named an unchanged side.

That meant no Test debut for serial drinks-carrier Adil Rashid, who will have to wait until England's October trip to play Pakistan in UAE for a chance to prove his leg-spin can be effective at Test level.

England's hopes of winning four Tests in a home Ashes series for the first time may depend on their performance on the second morning, when early wickets will be required.

If Australia can push their first-innings score significantly beyond 400, they will be in a good position from which to dictate the game and push for a victory that would take some gloss off England's Ashes coronation.

England all-rounder Ben Stokes: "We've only got them three down but on another day we could have bowled worse and had them five or six down. Australia played better than at Trent Bridge but there were a lot of positive things from us.

"The eye is still on the prize for 4-1, we bowled fantastic with the new ball so hopefully we can take three or four with the second one."

Australia opener Warner: "We knew it was going to be tough conditions, for us it was about leaving and respecting good deliveries. Me and Chris left well, which put us in a great position.

"The England bowlers bowled well but I felt it was our day. To come out and show what we're made of was fantastic from our top order."

Listen to every episode of Pint-sized Ashes