England are on course for a heavy defeat by Australia in the fifth Ashes Test after Alastair Cook's late dismissal all but extinguished their faint hopes of saving the game.

The captain was caught at short leg off Steve Smith's part-time leg-spin for a gutsy 85 in the penultimate over of the third day to leave his side perilously poised on 203-6, still 129 runs behind Australia after their skipper Michael Clarke enforced the follow-on.

Under-pressure England opener Adam Lyth, Ian Bell, Joe Root and Ben Stokes made just 34 runs between them, while Jonny Bairstow contributed 26 and Jos Buttler dug deep to reach 33 not out at the close on a scorching summer's day at The Oval.

England's ninth-wicket pair had earlier added 47 as they were bowled out for 149 in reply to Australia's 481.

And despite Cook's valiant efforts, the damage done by England's desperate collapse on Friday afternoon appears certain to have condemned them to defeat.

The hosts had already regained the Ashes after their victories at Cardiff, Edgbaston and Trent Bridge gave them an unassailable 3-1 series lead.

Clarke's decision to ask a team to follow on for the first time in his captaincy career provided Lyth with an opportunity to salvage his series - but once again the Yorkshire left-hander was not up to the task.

He had made 10 runs when he poked at a ball shaping away from Peter Siddle and was caught by Clarke at slip.

Nick Compton, Joe Root, Michael Carberry, Sam Robson and Jonathan Trott have also auditioned for the role, without ever doing enough to make it their own.

Despite his pedigree, Bell is another player facing an anxious wait to see if he is included in England's party for the series against Pakistan in the United Arab Emirates.

He looked desperately out of sorts and was dropped on three at second slip by Clarke as he scraped together 13 runs. But when a lifter from Mitchell Marsh glanced off Bell's glove, this time Clarke made no mistake.

Root fell trying to take on Mitchell Johnson in the first over, as he top-edged a hook shot to Mitchell Starc at long leg.

Bairstow and Ben Stokes then succumbed in the same Nathan Lyon over after tea, although Bairstow should not have been given out by the letter of the law.

Adam Voges took a juggling catch at short leg, but the ball made contact with the grille of his helmet in the process, which should technically have nullified the dismissal.

But Cook digs in…

With wickets tumbling at the other end, Cook remained serene as he moved towards what would have been his first Ashes hundred in England.

He eschewed risk, scoring heavily on the off side and raising some hope of England surviving through to Sunday afternoon's predicted downpour.

His second ball - a full toss - was dismissively sent to the boundary by Buttler, but the last ball of the over gripped and turned enough to catch the splice of Cook's bat and fall into the grateful hands of Voges.

As the Australians celebrated wildly, Cook was a picture of disappointment as he loped back to the pavilion knowing that the game had gone. 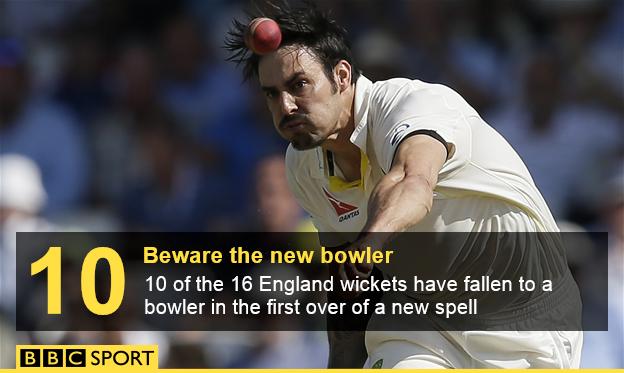 Cook's dismissal brought Mark Wood to the crease for the second time in the day, the Durham fast bowler having earlier combined with Moeen Ali to help England add 42 runs to their overnight 107-8.

Both fell in successive deliveries from Johnson, Wood becoming the fourth England batsman to perish on the pull shot as he looped a catch to mid-wicket and Moeen nicking to Peter Nevill.

Australia seam bowler Peter Siddle: "The follow-on is always hard, it was a long day today, but Pup [captain Michael Clarke] asked us what we wanted to do, and he wanted to have a real go at winning this Test match.

"Pressure is key. I would have liked my chance, but I didn't bowl as well as I could in the tour matches."

England wicketkeeper Jos Buttler: "We're up against it, but we've just got to keep fighting and hang in there. The captain showed that for most of the day. It would be great if we could get out of this, and a bit of rain would be great.

"I've had a tough series, it's been tough mentally when you keep finding ways of getting out, but you've got to keep scrapping. I'm really happy with the way my keeping's gone - I feel there's been a progression."