Australia completed a comprehensive victory in the fifth Test to dampen England's Ashes-winning celebrations at The Oval.

The tourists took England's four remaining second-innings wickets either side of a three-hour rain delay to win by an innings and 46 runs.

Peter Siddle made the breakthrough when he trapped Mark Wood lbw for six before Jos Buttler chipped Mitchell Marsh to mid-off for 42.

When play resumed in mid-afternoon sunshine Siddle bowled Stuart Broad for 11 and had Moeen Ali caught behind for 35 to finish with 4-35 as England were bowled out for 286.

The defeat had no bearing on the destination of the Ashes, with England captain Alastair Cook lifting the iconic urn amid fireworks, ticker tape and champagne after his team won the series 3-2.

The hosts, underdogs coming into the series, avenged the 5-0 whitewash down under in 2010-11 and have now won all four home Ashes series since losing in 2001.

Australia will take solace from the emphatic manner in which they finished the series, ensuring they sent captain Michael Clarke into retirement on a winning note.

Clarke was given a standing ovation by The Oval crowd as he led out his team-mates on the fourth day, with England resuming on 203-6.

He announced his retirement after the Ashes were surrendered in the fourth Test at Trent Bridge and will hand over the captaincy to batsman Steve Smith.

When Siddle took the final wicket, Clarke, who captained Australia in 47 of his 115 Tests, was engulfed by his team-mates before he and fellow retiring team-mate Chris Rogers held souvenir stumps aloft and soaked up the crowd's applause.

Clarke then darted across the outfield to acknowledge the travelling Australia fans, signing autographs and posing for pictures. 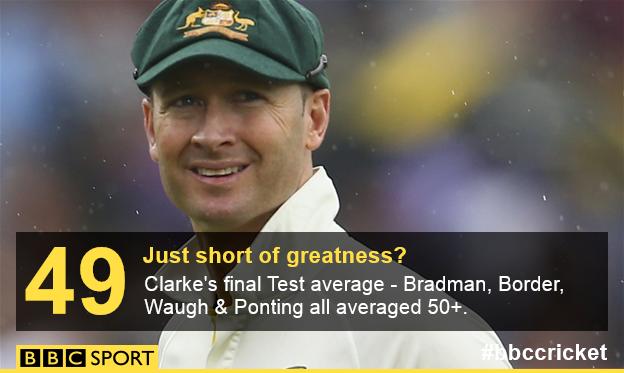 Story of the series

Australia's resounding win was reflective of a series low on tension but high on drama.

England belied their status as pre-series underdogs to win the first Test in Cardiff, before falling to a 405-run thrashing at Lord's.

Then came two extraordinary England victories as Australia handed over the Ashes in a succession of spectacular batting collapses on the seaming wickets of Edgbaston and Trent Bridge.

England will travel to Australia to defend the Ashes in 2017-18.

England captain Alastair Cook on Test Match Special: "The last four days haven't quite gone to plan, but going into the series no-one gave us a chance, so we can't let that take the gloss off a special summer.

"There has been a little bit missing in this match - it wasn't complacency - but emotionally to come from such a high at Trent Bridge and be 100% on it was hard and we couldn't quite manage it."

Australia skipper Michael Clarke: "This game sums up the series - both teams have had a rollercoaster ride. The boys did as I asked here - it was a test of our character and we came through it."

England batsman and man of the series Joe Root, who scored 460 runs at an average of 57.50: "At the start of the series, I wanted to prove to myself and the rest of the guys that I can do well against Australia. Hopefully it's a stepping stone and not the highlight of my career."

Australia batsman Chris Rogers, who is joining Clarke in retirement: "We showed that when we play well, we're easily good enough, but we didn't put in enough good performances. We'll look back at this and think, 'what if?'"

The teams will play a one-off Twenty20 international in Cardiff on 31 August and five one-day internationals from 3 September.

Both teams are back in action in October, with England heading to the United Arab Emirates to play Pakistan, while Australia travel to Bangladesh.