The term "yo-yo club" is often associated with football.

However, with two promotions and two relegations in the past four years, Lancashire are used to the highs and lows of the County Championship.

After being relegated last year, they have secured an immediate return to Division One with two matches to spare.

Former England spinner Ashley Giles has guided them to promotion and the T20 Blast title in his first season as head coach and cricket director.

In 2011, Lancashire won the County Championship title outright for the first time in 77 years, with a side filled with locally produced players. Giles' remit will be to reach those heights again.

So what have been the key factors to their success this summer, and can they end their yo-yo status?

The influence of Giles

When Peter Moores left Lancashire to become England head coach in April 2014, he beat Giles to the top job in the country.

Giles, 42, had guided Warwickshire to the County Championship title in 2012 before taking the position of England limited-overs coach.

After a shock 45-run defeat by the Netherlands at the World Twenty20 tournament in 2014, Giles has rebuilt his reputation this season as one of the top coaches in the English game.

"They have been promoted at the first time of asking, made an appearance at T20 Blast finals day and started the rebuilding of a side with the next crop of Lancashire players." 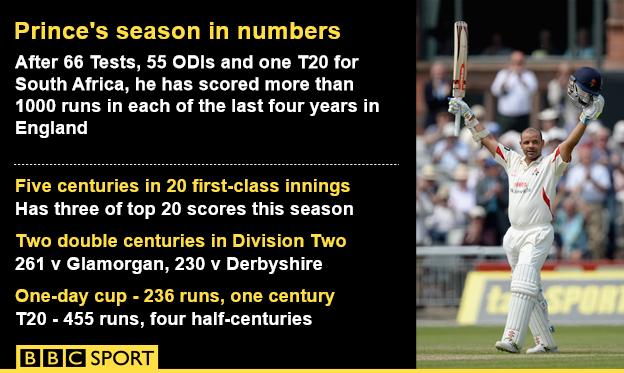 Perhaps Lancashire can look back to November 2014 as one of the key moments of their 2015 season, when Ashwell Prince reversed his decision to retire.

Fellow South African Alviro Petersen, 34, is not far behind on 847 runs at an average of 47.05, including a high score of 286 against Glamorgan in July.

"Batting at number three and four, Petersen and Prince forged a club-record partnership of 501 at Colwyn Bay against Glamorgan to effectively clinch promotion," said Read.

"For Prince to score more than 2,000 runs in a season across all formats is a remarkable achievement and vindicates his decision to change his mind about retirement."

Asked whether Prince will retire at the end of this season, Giles said: "He's not confirmed it, confirmed it - but I think he's probably confirmed it.

"We had a conversation and I said 'you need to let me know if you do' but I've not had anything."

Changing of the guard

Against Glamorgan last month, 18-year-old England Under-19 captain Haseeb Hameed made his debut alongside player-coach Glen Chapple - a man 23 years his senior.

This is just one example of a new generation making their mark, with Kyle Jarvis, Jordan Clark, Liam Livingstone and Arron Lilley all establishing themselves in the Lancashire team.

"Things move on and we've got to try to create some space for some promising players," Chapple told BBC Radio Lancashire.

"They're battering the door down, they're performing and that's the reason they're getting a go.

"I think it's great when really exciting players come along - it's about finding the right time for players to come through, whilst obviously competing and trying to win trophies."

With opener Paul Horton leaving at the end of the season and doubts over whether Chapple and Prince will return, it would mean Petersen and Steven Croft are the only players above 30 left in the squad.

Read added: "In his own words, Giles wanted to 'wean Lancashire off Glen Chapple'. With the help of the club's former captain, who has combined playing with coaching, they've started doing just that.

"It has been a season to remember for Kyle Jarvis. In addition, there has been the development of Tom Bailey and Jordan Clark, and the occasional appearance of youngsters Saqib Mahmood and Toby Lester."