Taylor, who scored 42 before he hit his first boundary and struck only five in his innings, reached three figures in the penultimate over and fell with four balls remaining.

It would have been the highest successful ODI run chase at Old Trafford if Australia had made it - but the hosts looked in control as soon as leg-spinner Rashid took the crucial wickets of Finch and captain Steve Smith. 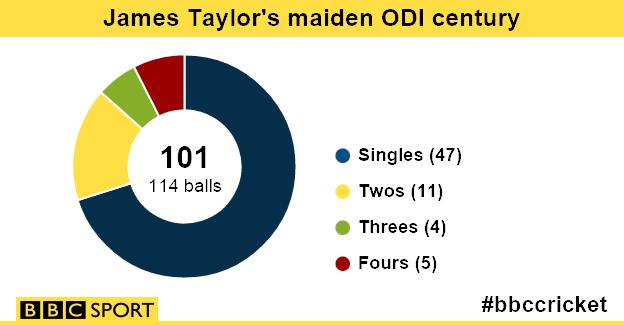 Taylor's stop-start ODI career took another turn with a deserved maiden hundred - but it will be interesting to see where he fits into the England side in the long term.

Having played in under-strength England sides sent to Ireland for one-off games and captaining one such team this year after being shunted up and down the order during England's calamitous World Cup campaign, Taylor has had to wait patiently for his chance.

After he carried the drinks against New Zealand earlier in the summer, the decision to rest Joe Root for this series opened the door for Taylor again - and he has wedged his foot into that door with scores of 49, 43 and 101 at first wicket down.

Despite that long wait for a boundary, the Nottinghamshire right-hander paced his innings well, running hard between the wickets for 40 overs without appearing to tire, and, though he needed to rebuild twice after losing Roy and Morgan, Taylor was never panicked into playing a false shot.

But when Root returns, England face a battle to squeeze 12 players into 11 unless they drop an all-rounder - so Taylor's uneven ride may not have finished just yet.

Old Trafford has traditionally rewarded spin bowlers - everyone from Jim Laker to Monty Panesar - and the pitch did not disappoint.

After Australia started well, Rashid breezed through his 10 overs in one burst, before off-spinner Moeen then picked up Glenn Maxwell and George Bailey in mid-innings as Australia's challenge spluttered.

The tourists had chosen an extra spinner with slow left-armer Ashton Agar (1-45) handed his ODI debut.

While he and Maxwell did their best to keep the brakes on England, they were ultimately out-bowled by England's spin pair.

Champagne catches for Finn and Roy

England have taken some superb catches this summer, notably Ben Stokes's slip catch in the Trent Bridge Test, but two breathtaking grabs under the Old Trafford lights stood out as nine out of 10 Australia wickets fell to catches.

Steven Finn's astonishing diving catch to remove Smith one-handed at short mid-wicket was out of the top drawer, and arguably turned the match.

"I've known Steven since he was 15 years old and he's never taken a catch like that. I hope he takes more," Middlesex team-mate Morgan told BBC Test Match Special.

Roy also plucked one out of the night sky after Agar lifted high towards long-on - he had run in a couple of yards too far but kept his eye on the ball and, at full stretch as he fell backwards, grasped the chance at the second attempt.

Aaron Finch won the World Cup in March, needed hamstring surgery after the Indian Premier League and was expected by Yorkshire to miss the rest of the summer with a foot injury.

He was one of three Aussies plucked from county cricket to bolster an injury-hit squad which has seen no fewer than seven players leave the tour since it began in June, and found himself straight back at the top of the order here to replace the injured David Warner,

The right-hander hit eight fours - the majority powerful straight drives - in a characteristically aggressive 53 before he lifted Yorkshire team-mate Rashid to Woakes at long-on.

Finch, Rashid and the other Tykes players will be on more familiar territory when the series continues at Headingley on Friday.

England skipper Eoin Morgan on TMS: "The most pleasing aspect was the amount that we won by, given that the shoe was on the other foot for the first two games of the series."

Man of the match James Taylor: "I got 98 not out against Australia [at the World Cup] so to get a hundred against them in a winning cause is nice."