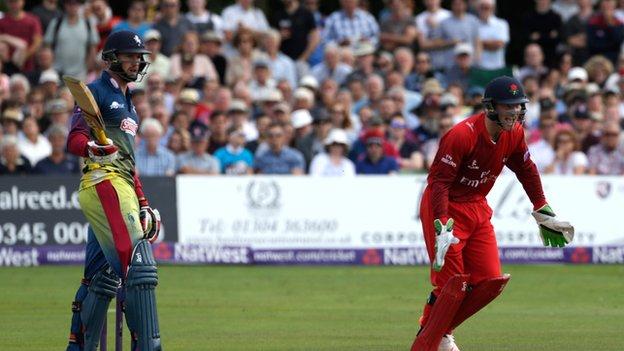 Kent batsman Alex Blake has followed up a fine summer in white-ball cricket by signing a new contract, though the county has not revealed its length.

Blake, 26, follows the lead of first-team captain Sam Northeast, Daniel Bell-Drummond and Matt Coles in committing his future to Kent.

"It's an exciting time for the club and I wanted to repay the faith shown in me," said Farnborough-born Blake.

"I've played at Kent my whole career so it was an easy decision to stay."

He added: "The reaction to my performances this season has been flattering and shows people are taking notice of what I've done.

"It's been a good campaign in white-ball cricket and we'll be looking to learn from it and go one or two steps further next year."

Kent topped their group in the T20 Blast, only to then lose to Lancashire in the quarter-final at Canterbury.

They also made the last eight in the One-Day Cup after finishing fourth in Group B, but again bowed out at the quarter-final stage, to Surrey.