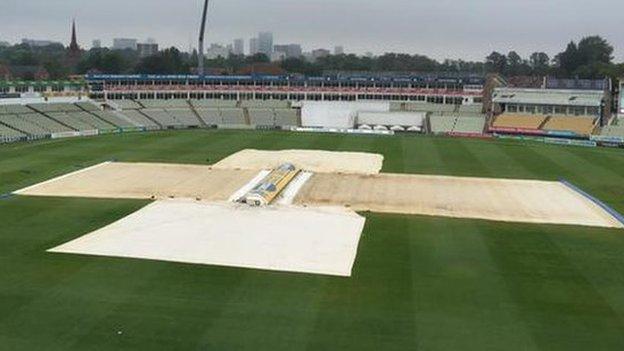 Nottinghamshire opener Alex Hales' hopes of a big score at Edgbaston to mark his England Test call-up were ruined by the weather.

After a first-day washout, play was delayed for half an hour, but only four overs were possible before another heavy shower arrived.

Hope of a restart were then wrecked by another mid-afternoon downpour.

Openers Hales and Brendan Taylor took Notts to 16-0 in the 24 balls faced from Keith Barker and Chris Wright.

Notts, who have both Hales and James Taylor in the England tour party for the Test series against Pakistan in the UAE, had to make a change in the seam department.

Luke Fletcher cames in for Harry Gurney, who has a stiff neck, while Warwickshire made one change, bringing in Laurie Evans for William Porterfield.

But, with only four overs bowled in the first six sessions, the match already looks doomed to finish as a draw.