Northants head coach David Ripley says there is a "bit of haves and have-nots" between Division One and Two clubs.

"There is a little bit of a divide developing between the Division One and Two clubs and that gap is hard to bridge," Ripley told BBC Look East.

"Worcestershire have come straight back down, as ourselves and Lancashire did last year. You can't hide behind that."

Ripley's side lost to fellow Division Two side Lancashire in the T20 Blast final this year.

"There's a bit of 'haves and have-nots', but it's quite an even spread. When the Division Two teams have their chance to go into Division One they'll be really up for giving a good account of themselves," Ripley added. 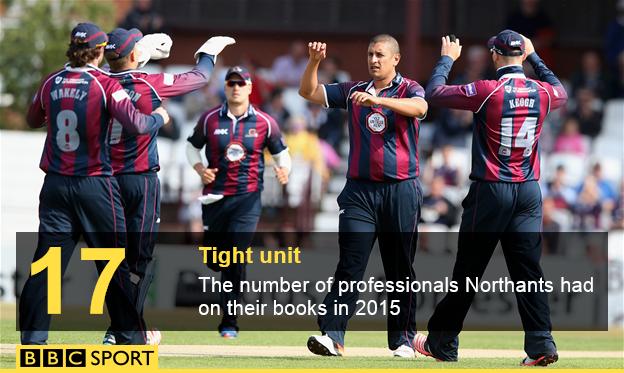 "If we can't generate outside finance or have a benefactor we have to live within our means. But we can still be competitive, certainly in one-day cricket, it's a bit more of a leveller, anybody can beat anybody. It's a bit harder."

Last week, the England and Wales Cricket Board decided that there will be no major structural changes to next summer's programme of domestic cricket.

New ECB chief executive Tom Harrison had told BBC Test Match Special in August that they were considering a reduction in the County Championship from the current 16 matches to 14 matches.

And Ripley says the English game needs to be open to doing things differently.

"I think we have to be realistic and look at change. There's 18 county cricket clubs and everyone of those is striving to produce England cricket players," he said.

"We need a good England team to all be surviving - that's our main role, that produces finance in the game, which comes back to the county clubs.

"After that, we need a vibrant county game - we haven't got a lot of members here but we've got a hardcore of supporters and if you look at some of the bigger clubs the membership is very high.

"So providing good county cricket for those members is very important in terms of value for money they get."