Pakistan's Shoaib Malik marked his first Test for five years with a century as England struggled on the opening day of the three-match series.

While Pakistan will be content with their position, England's bowlers deserve credit for the perseverance they showed on a surface offering minimal assistance.

Stuart Broad and Mark Wood claimed a wicket apiece, but Test debutant Adil Rashid and Moeen Ali went wicketless in a combined 36 overs after the tourists lost the toss in unfavourable conditions at the Sheikh Zayed Stadium.

Malik back with a bang 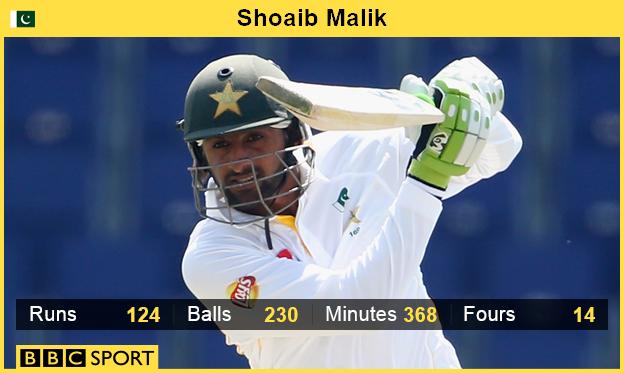 Playing his first Test since 2010 and his first first-class match for almost a year, 33-year-old Malik justified the selectors' faith with his third Test century.

The all-rounder, who has credited his wife - Indian tennis star Sania Mirza - with the revival of his international career, came to the crease with Pakistan 5-1 after Shan Masood was bowled via his helmet ducking into a James Anderson bouncer.

He showed occasional signs of impatience, most noticeably when he was caught by Joe Root at gully off a Broad no-ball.

However, he was largely untroubled as he added 168 for the second wicket with Hafeez, who was lbw playing across the line to Ben Stokes on the stroke of tea. 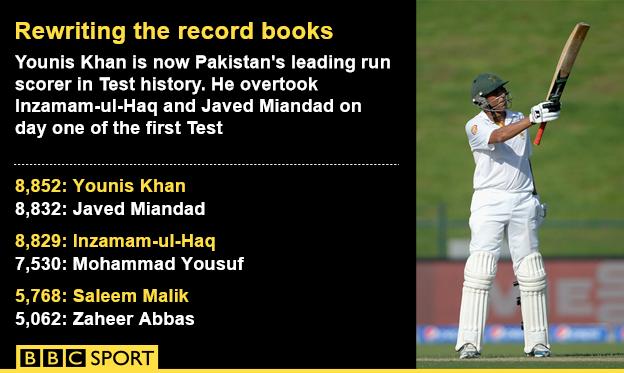 Younus Khan was far from at his best in making 38, but he did enough to become Pakistan's leading run scorer.

The 37-year-old overtook Inzamam-ul-Haq and Miandad, who had held the record for 30 years, when he clubbed Moeen Ali over mid-wicket for six to pass 19.

The third-wicket partnership was worth 74 when Younus drove Broad to Alastair Cook at the straighter of two short mid-ons.

Misbah-ul-Haq perished shortly after courtesy of a faint outside edge and a successful England review, but Asad Shafiq accompanied Malik until the close as Pakistan saw off the first three overs of the new ball.

On a day when England managed only four wickets in 90 overs, they were left to rue the mistakes which cost them three more.

Hafeez was put down when he had made only seven - a wicket which would have left Pakistan 12-2 - and Shafiq was reprieved on 10 in the penultimate over of the day.

But arguably of greater importance was the no-ball which aided Malik, who hit 13 fours on the way to a 182-ball century, his third in Tests.

England's Stuart Broad, speaking to BBC Sport: "I blame myself for the no-ball. We pride ourselves on our catching and not bowling no-balls. I can't think of many times I've had one chalked off, if at all. It's a feeling of distraught.

"I'm not a regular no-ball bowler so it took me a bit by surprise but it's not really acceptable at this level. After lunch it was a gusty wind and as a bowler it can affect your stride pattern. It's about millimetres really. I apologised at tea to all of the guys because it was disappointing."

"With Ian Bell dropping two catches and Stuart Broad taking a wicket with a no-ball, it adds up to a lot of runs and creates despondency. Pakistan have been given three extra lives."

Pakistan's Mohammad Hafeez on Sky Sports: "Once you get past the new ball, you can score runs. I can't believe I got out in the nineties, but hopefully 98 is enough for the team.

"England bowled well with the older ball but hopefully we can push beyond 400 now."