He batted throughout the third day but England lost two wickets in three overs late on as they closed on 290-3, needing 34 more to avoid the follow-on.

Those two wickets for four runs boosted Pakistani spirits on another day when bat dominated ball, on a soporific surface which has been widely criticised.

Cook's 28th Test century was typical of so many of his previous 27, founded on patience, discipline and excellent shot selection.

He dominated his first Test opening stand with Moeen Ali, tucking the ball off his pads with customary ease and capitalising on any width afforded outside off stump.

His approach was unaffected by the departure of Moeen, who was caught behind for 35 pushing at Imran Khan shortly before lunch to end a patient first innings as a Test opener.

Cook had made 147 by the time he offered a chance, substitute fielder Fawad Alam dropping a tumbling effort at backward square-leg off a top-edged sweep. 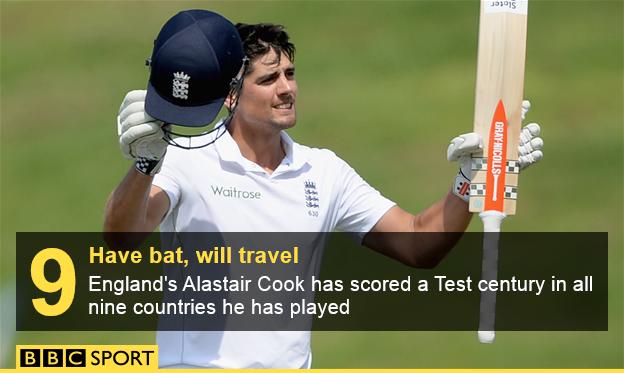 Bell back in form?

Bell spent the early part of his innings batting like a man who contemplated retirement following a miserable Ashes this summer.

Knowing that his dropped attempts to catch Mohammad Hafeez and Asad Shafiq cost England 188 runs in the field, Bell himself was reprieved on one when Shan Masood grassed a sharp bat-pad chance at silly point off Zulfiqar Babar.

He managed only one run off the first 33 balls he faced and saw a couple of edges fall short of slip before finally finding something approaching fluency as he compiled a 134-ball half-century.

He perished five overs before the close when he drove the persevering Riaz, who regularly touched 90 miles per hour, to Hafeez at point.

Wood, sent in to protect Joe Root, was dropped at second slip on nought before playing on as he attempted to force off the back foot.

How bad is the pitch?

With only 11 wickets falling in nine sessions - four of which came when Pakistan were chasing declaration runs - criticism of the pitch at the Sheikh Zayed Stadium showed no sign of abating.

Although the spinners found turn from early on the first day, the surface sorely lacks pace and bounce and there has been negligible reverse-swing with the older ball.

"This is tedious," former England batsman Geoffrey Boycott said on Test Match Special. "You can't sell this product to spectators."

Ex-England spinner Graeme Swann joked that the pitch is "as lifeless as an away game at Luton Town" - before earning a swift rebuke.

So a draw is a certainty then?

While the departure of Bell and Wood in 14 balls raised the prospect of an England collapse on Friday, a fourth draw in nine Tests on this ground remains the most likely result.

With Cook at the crease, however, England could yet establish a first-innings advantage.

Boycott said: "If England bat all day tomorrow, then they'll have a small lead with one day to go.

"That's not enough time to win the game - who's going to get those wickets quickly and cheaply?"

England captain Alastair Cook on TMS: "For the good of cricket, you don't mind the pitch like this for three days if it ends up breaking up - not that we want it to do that because we want to stay in the game.

"We're still 230 runs behind and that's a long way away. We have got a lot of great batters to come and, after waiting their turn, hopefully they fill their boots too."

Former England captain Michael Vaughan: "Normally, when somebody gets a century, it's the batsmen who rush to congratulate him.

"With Alastair Cook, it was the bowlers - he's the bowlers' best mate. He's given them a day in an air-conditioned dressing room sipping tea."