England batsman Joe Root says the tourists have a chance of forcing victory on the final day of the first Test against Pakistan.

England ended day four in Abu Dhabi on 569-8, a first-innings lead of 46 with two wickets remaining, after Alastair Cook hit 263.

"It's given us a chance of getting a result out of this game," Root said.

"It's going to take something really special, but we have a glimmer of hope."

England lost 3-0 on their last tour of the United Arab Emirates, but Root, who hit 85 in England's innings, believes they can still get off to a winning start on this one.

"Anywhere up near a 100-run lead gives us a small chance of winning," he said.

"The pitch has started to spin a bit more, there's a bit more rough there. There was a spell of reverse swing from Wahab that looked very threatening, so there's plenty happening that could give us a chance of a result."

"I would be demanding a positive view in my dressing room," he told BBC Test Match Special.

"If there is a sapping energy in the dressing room and people saying, 'It'll be a draw', then it will be."

But former England batsman Geoffrey Boycott said he was "convinced" the match would finish in a draw.

"You shouldn't lose wickets on there," he said. "The players have done their best, but you could play for 10 days on there and you'll still get a draw." 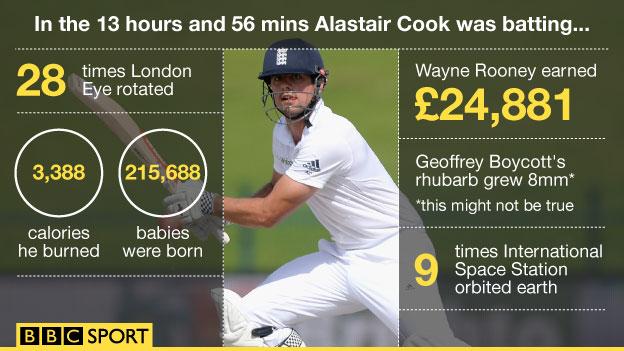