A hundred from Pakistan captain Misbah-ul-Haq seized the initiative after England threatened to take control of the second Test on day one in Dubai.

A disciplined bowling performance had earlier seen Pakistan reduced to 178-4.

James Anderson, Moeen, Mark Wood and Ben Stokes took a wicket each, while Shan Masood (54) and Younus Khan (56) made half-centuries.

England can be pleased with their effort on a surface that holds few problems for batsmen, but one that has offered more encouragement for the pace bowlers than the drawn first Test in Abu Dhabi.

And even if Pakistan threatened to waste the advantage of batting first, Misbah put them in the stronger position, especially with fit-again leg-spinner Yasir Shah likely to bowl last on a wicket that is set to turn.

Misbah averages more than 57 with the bat as Pakistan captain, but may have felt in debt to his side after a rash stroke in the first Test sparked a collapse that set up England's unlikely push for victory.

He initially looked uncomfortable against England's pace bowlers and was hit on the head by a Wood bouncer, as well as edging Stokes just short of the slips.

But he swept the spin of Moeen and Adil Rashid with aplomb as well as hitting the inconsistent Rashid for three straight sixes.

Beginning the final over of the day on 87, he twice hit Moeen over the leg-side rope to move to 99, with a reverse sweep making him the oldest Test centurion since Australian Bobby Simpson in 1978.

Just as they did in Dubai, England's quartet of pace bowlers impressed with both a constant wicket threat and the ability to keep Pakistan's batsmen in check.

After Moeen had opener Mohammad Hafeez loop an inside-edge to short leg, Stokes got Shoaib Malik to push in the same direction, where Jonny Bairstow took a brilliant one-handed catch to grab a rebound off his own chest.

Anderson rolled his fingers over an off-cutter from the very first delivery after lunch to have Masood poking behind, while Stokes and Wood caused problems during a fourth-wicket stand of 93 between Misbah and Younus.

Stokes, described as "not 100% fit" by captain Alastair Cook following a stomach virus, found reverse swing in the air and movement off the seam, while the hostile Wood was eventually rewarded when Younus was caught down the leg side.

Pakistan's could have been in a stronger position had Masood or Younus kicked on from solid starts.

Opener Masood, who made two and one in the first Test, looked much more fluent for his 54, but needlessly followed Anderson's first delivery after lunch.

Younus was rarely troubled, but his shuffling technique would be his undoing when he got too far across his stumps and feathered through to Jos Buttler.

At that point, England had hope of making deep inroads, but Asad Shafiq's composed unbeaten 46 accompanied Misbah to the close in a stand of 104 that brought 42 runs from 10 overs with the second new ball. 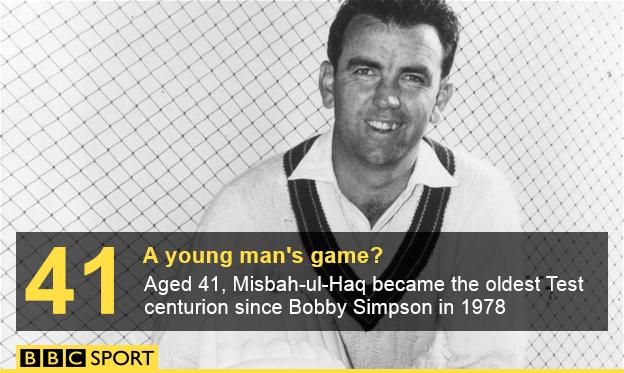 Former England batsman Geoffrey Boycott on Test Match Special: "Misbah is an odd sort of player. He defends well, but he obviously likes the spinners. He'll defend one or two, then he whacks it out of the park.

"I wouldn't say the ball was doing anything, but Pakistan kept playing and missing, giving England a chance. When they did nick one, it went down, it never went to hand."

England pace bowler Mark Wood: "If we could have had one more wicket, we'd have said it was a really good day.

"At number eight they've got a bowler, so if we can get into them early doors tomorrow, then hopefully we can knock over the tail pretty quickly.

"The wicket was probably easier to score on than Abu Dhabi, a bit more skiddy, which suits my type of bowling. But all in all, it's a better pitch to bat on."