James Taylor's maiden half-century moved England into a good position on the second day of the third and final Test against Pakistan in Sharjah.

Taylor, playing his first Test for three years, made an unbeaten 74 to move the tourists to 222-4.

England accelerated late on a largely painstaking day to close 12 behind.

Alastair Cook made 49, Ian Bell 40 and Jonny Bairstow 37 not out for the tourists, who must win to avoid a series defeat.

Both Cook and Bell fell to the leg-breaks of Yasir Shah, who served notice of his threat on a pitch that turned less than the first day but is still hard work for the batsmen.

With a large fourth-innings chase likely to be a difficult task, England require significant occupation of the crease on day three if they are to build a match-winning lead.

Cook and Bell shared a second-wicket stand of 71, but England were almost derailed by an impressive display of Pakistan bowling after lunch.

As Yasir and left-arm pace bowler Rahat Ali brought scoring to a standstill, Cook and Joe Root fell for the addition of only seven runs.

At 97-3, right-hander Taylor, recalled in place of Jos Buttler after being overlooked for the first two Tests of the series, arrived for only his fourth innings in Test cricket.

In the company of Bell, he first absorbed the Pakistan pressure, then gradually accumulated in the busy, energetic style that has brought him success in England's one-day side.

Looking particularly accomplished against the spinners, Taylor mixed powerful sweep shots, balletic foot movement and deft nudging of singles on both sides of the wicket.

After Bell departed, he combined with the fluent Bairstow for an unbroken stand of 83 as England scored more quickly against the second new ball late in the day.

"It's been a real tough wicket to bat on. But Taylor has made it look simple, which is the biggest compliment you can give him," former England captain Michael Vaughan told Test Match Special.

"He clearly trusts and believes in his game. I'd say he's going to be a fixture now in the Test team."

While Pakistan might have expected more success on a pitch that had seen them bowled out for 234 on the first day, leg-spinner Yasir gave a further demonstration of the danger he will pose to England later in the match.

A sustained period targeting the pads of Cook saw the England captain twice fortunate to avoid being caught at short leg before lunch, only for the left-hander to fall in just that manner right after the break.

Bell had looked comfortable in both attack and defence, but he was also undone by Yasir just after tea.

The right-hander was fortunate to survive a reviewed caught-behind decision off left-arm spinner Zulfiqar Babar, only to be lured in the next over by a dipping, spinning Yasir leg-break and stumped by Sarfraz Ahmed.

"Countless times the ball has gone past the outside edge. He's certainly bowled well enough to get a lot more than two wickets." 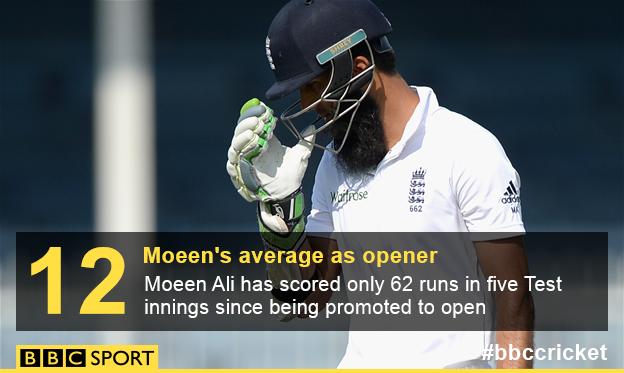 Though many saw Moeen Ali's promotion to open the batting as a short-term measure that allowed England to play an extra bowler in the UAE, Cook suggested before the series it could be a more permanent move if the Worcestershire man impressed.

However, Moeen's return of 62 runs in five innings suggests the experiment will end after this Test meaning Cook will have an eighth opening partner in little more than three years when England play South Africa in December.

Not only are the numbers poor, but the manner of his dismissal on the second morning was not befitting of a Test opener.

In only the seventh over of the day, Moeen looked to slog sweep the fourth delivery he faced from off-spinner Shoaib Malik and could only top edge straight up and into the hands of Younus Khan at slip.

"That was irresponsible, stupid, ridiculous," former England opener Geoffrey Boycott said on Test Match Special. "Moeen bats better down the order. I don't understand England keeping him as an opener."

Ian Bell on TMS: "Today was about grinding out a day of Test batting. It wasn't going to be the best-looking style of cricket, but about trying to get a lead. If we can win the first session tomorrow then we are in a great position. There's a lot of batting to come and every run we get puts us in a better position."

Geoffrey Boycott on TMS: "I wouldn't say England are fully on top, but they've put themselves in such a condition that it might allow the bowlers that bat to attack the bowling tomorrow. A lead of 50 or 70 would be good but anything else would be outrageously marvellous. They won the battle today but they haven't won the war."

Former England captain Michael Vaughan on TMS: "If they can bat another session and a half, they will get a 100-120-run lead, which will be huge in this match. You just never know with England - but they're in the box seat."