Former England cricketer Tom Graveney has died at the age of 88.

He scored more than 47,793 first-class runs - including 122 hundreds - in a career that stretched from 1948 to 1972 and included spells at Gloucestershire, Worcestershire and Queensland.

After retiring, he became a BBC commentator and served as the 200th president of the MCC in 2005.

He was the first former professional cricketer to be appointed to the post.

Graveney captained England once at the age of 41, deputising for Colin Cowdrey against Australia at Headingley in 1968.

His older brother Ken died recently at the age of 90. Both were former Gloucestershire captains.

'Synonymous with a golden era'

Graveney was Worcestershire president from 1994-98 and remained a regular visitor to New Road.

In a statement, the club said he had had Parkinson's disease for some time.

Worcestershire chief executive David Leatherdale said: "He was one of the stalwarts of our first two championship triumphs and will be hugely missed by everyone at Worcestershire CCC and by cricket as a whole."

"He was an aesthetic player as well, he was lovely on the eye because he played gorgeous cover drives. He made 120-odd first-class hundreds, so that shows he could play, he could seriously play."

"I knew him as someone who loved cricket, someone who really loved talking about the game," said Agnew. "He would sit in the bar and just talk for hours about the modern game, and how he used to play.

"He had pretty strong opinions. He would talk a lot about some of the West Indian throwers he faced in his batting days and how he thoroughly disapproved of that, but he was a real gentleman.

"I think that's what he'll be remembered for as much as for the style that he brought to the crease."

England and Wales Cricket Board chairman Colin Graves said: "I count myself privileged to have seen Tom Graveney bat. He was one of the game's great stylists; a batsman whose name became synonymous with elegance and whose perfectly executed cover drive will live long in the memory of those who saw it.

"He was also a true gentleman; someone who served our county game with distinction and who, later in life, gave back much to the game he so dearly loved by becoming MCC president." 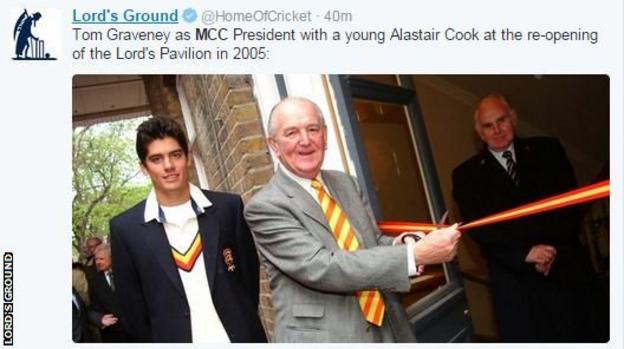