England subsided to a 127-run defeat in the third and final Test against Pakistan and a 2-0 series loss.

Resuming on 46-2 in pursuit of an unlikely 284, England lost four wickets for 11 runs in the first hour and were eventually bowled out for 156.

On a pitch turning sharply, only Alastair Cook resisted with 63 and was the ninth England wicket to fall.

Yasir Shah took 4-44 and Shoaib Malik 3-26 to give Pakistan's spinners a total of 17 wickets in the match.

In contrast, England's trio of slow bowlers returned combined figures of 7-423 from 115.2 overs.

England, who have lost seven of their past nine Test matches away to Pakistan, are without a series victory abroad for three years and slip from third to sixth in the world rankings.

Where it was lost

Though England were found wanting against the turning ball, they ultimately paid the price for errors over the first four days.

While they can rightly point to losing Ben Stokes through injury, England must also reflect on a first-innings collapse that saw their last six wickets fall for 78 runs.

Not only were England's spinners very poor in the second innings, but Mohammad Hafeez, who made 151, was afforded two dropped catches and a missed stumping.

Cook's men came some close to winning the first Test and were competitive for large parts of the series, but were defeated by batting collapses, fielding errors and inferior spin bowling.

If the suspicion was that England's Adil Rashid, Moeen Ali and Samit Patel failed to make the most of helpful conditions, it was confirmed by only the 10th ball of the day.

A Yasir short ball scuttled along the ground, leaving the helpless Joe Root plumb in front.

Zulfiqar Babar accounted for James Taylor and Patel, caught at slip and lbw respectively, either side of Jonny Bairstow's ugly sweep to Yasir.

England's numbers three to seven managed only eight runs between them - the fewest for 118 years. Going back to the fourth evening, the total collapse was six wickets for 25 runs.

Only Cook had the patience, technique and fortune to resist, looking set to become the first England player to bat through a completed innings since 1997.

But he was stumped when beaten by a Malik off-break and, in the next over, Stokes fell in similar fashion to Yasir to seal England's fate. 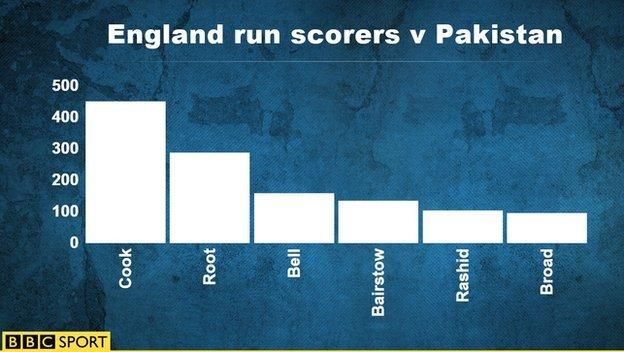 With former England opener Geoffrey Boycott saying that Cook's men have a "glaring hole at number two and number three", there is much to ponder before they face South Africa's fearsome pace attack.

Alex Hales looks to be next in line to open the batting, while a decision on Ian Bell must be made before the first of four Tests begins on 26 December.

Before that, nine of England's Test squad remain in the UAE for four one-day internationals and three Twenty20s against Pakistan.

Pakistan, now ranked second in the world, are not scheduled to play another Test until they travel to England for four matches next summer.