England were well beaten in the first one-day international as Mohammad Hafeez's unbeaten century led Pakistan to a six-wicket win in Abu Dhabi.

But the tourists lost five wickets for 33 runs and were bowled out for 216.

England's one-day cricket during the home summer was much improved, but this defeat in the first of the four-match series was more in keeping with the performances of a dismal World Cup.

As well as the failure with the bat, only Topley provided a constant threat with the ball.

In contrast, Pakistan's trio of pace bowlers and leg-spinner Yasir Shah were excellent, the hosts' fielding was electric and Hafeez imperious.

A tale of two collapses

On a blameless pitch, Jason Roy was bowled by the 7ft 1in Mohammad Irfan before Joe Root and Alex Hales were lbw and caught at slip respectively off the skiddy Anwar Ali.

That early trouble, though, looked set to be rendered irrelevant by Morgan and Taylor, who calmly rebuilt.

Morgan, whose last innings in ODI cricket ended in a concussion as a result of a Mitchell Starc bouncer, was troubled by the first Irfan bumper he faced, but then scored when the bowlers dropped short.

Taylor supported with characteristic nudging and running, then went past 50 with a pair of straight sixes.

But, when Morgan edged Shoaib Malik behind, England imploded. Jos Buttler was run out thanks to Taylor's poor call, Taylor chipped Malik to mid-wicket and Moeen Ali was brilliantly caught by Babar Azam.

After Adil Rashid holed out to an Irfan slower ball, it needed a ninth-wicket stand of 33 between David Willey and Chris Woakes to drag England past 200. 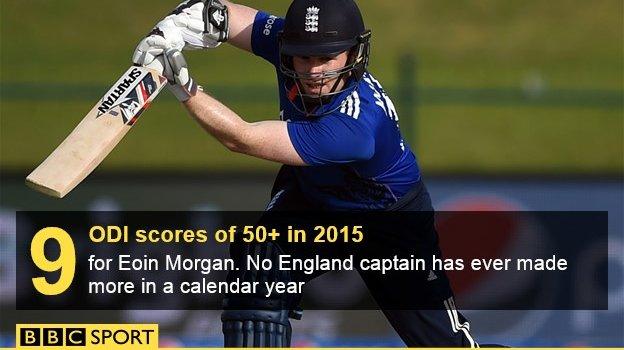 Pakistan, so formidable in the UAE in Test cricket, have won only one of the previous six ODI series in their adopted home, including a 4-0 defeat by England in 2012. At eighth, they are two places behind Morgan's men in the world rankings.

Here, they were given a platform for victory by their bowling and fielding.

While that was no surprise, a flawless effort in the field is not usually expected from a Pakistan side.

Younus Khan juggled a sharp catch at second slip to remove Root and captain Azhar Ali was sharp to run out Buttler and hold Taylor.

Azam's one-handed effort to remove Moeen was extraordinary. Fielding at short mid-wicket, he leapt high to his left, diving goalkeeper-style to cling on to a wonderful catch.

Hafeez holds it together

England looked to have a chance when left-armer Topley swung the new ball to trap both Azhar and Bilal Asif lbw, before Younus slapped to mid-on.

However, neither Woakes or Willey found the same movement and leg-spinner Rashid had no consistency of length.

That is to take nothing away from Hafeez, who played classy off drives and punished anything short in his 11th ODI hundred.

He shared stands of 70 with Malik and an unbroken 106 with Azam, who brought up his half-century with a straight six off Woakes.

By the end, England were as listless as Pakistan has been energetic.

Younus Khan, recalled to the Pakistan side for the first time since the World Cup, sprung a surprise on the morning of the match by announcing his retirement from ODI cricket.

The 37-year-old, who made nine in his last innings, played 265 ODIs and ended as Pakistan's sixth-highest runscorer.

England captain Eoin Morgan told BBC Sport: "I don't like making excuses. In the last two series we've played, we have been slow starters. We have to learn what we can from today and put things right in the next game.

"I don't think we can look to the bowling too much. Defending 217 is pretty harsh on the bowlers. We didn't bowl as well as we have in the past, but the fault today lies solely on the batting unit."