Alex Hales struck his maiden ODI century to lead England to a 95-run win over Pakistan in the second ODI, levelling the series at 1-1.

A strong bowling finish raised Pakistan's hopes but they collapsed to 50-5 with the bat.

Sarfraz Ahmed hit a battling 64 but could not prevent England's first competitive victory of the tour.

The win keeps alive England's hopes of overall victory in the four-match ODI series, which continues on Tuesday in Sharjah. 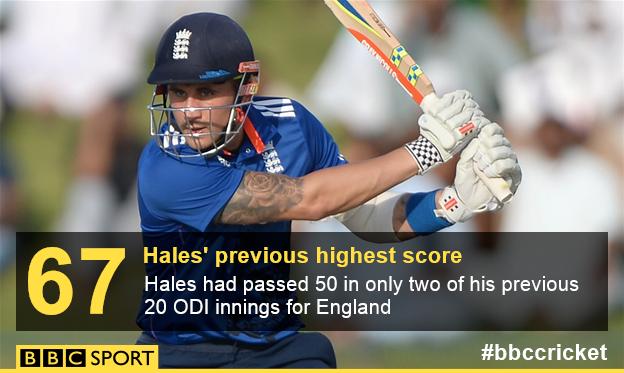 England had collapsed to 14-3 in the first ODI, but with Hales and Roy looking assured from the start, a repeat was never on the cards.

Despite their reputation as an aggressive, risk-taking duo, this was Hales and Roy's fifth fifty partnership in 12 innings - making them considerably more secure than England's Test openers, who have managed the feat just once in their last 12 innings.

And with Hales seemingly a strong candidate to join Alastair Cook at the top of the order in the long format when England tour South Africa, it was his ability to build partnerships that will have impressed the England coaching staff.

Once Roy fell trying to hit Wahab Riaz over the top, Hales - playing in his 22nd ODI - put on another 100 partnership with Root.

The Nottinghamshire batsman brought up his ton with a paddle sweep, but was stumped shortly after to give debutant Iftikhar Ahmed his maiden ODI wicket - and his departure allowed Pakistan to take back a measure of control, restricting England to just 56 in an excellent last 10 overs.

Woakes and Willey rip through Pakistan 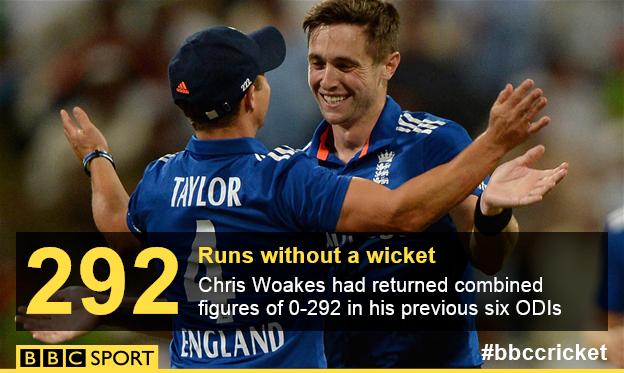 Any hopes Pakistan had of carrying that momentum into the early part of their innings were undone as Woakes and Willey, who bowled 15.4 wicketless overs between them in the first ODI, destroyed their top order.

Left-armer Willey started the collapse, trapping opener Babar Azam lbw for four then having Mohammad Hafeez caught behind for a duck.

Woakes, wicketless in his previous six ODIs, then took over, dismissing debutant Iftikhar and Shoaib Malik in almost identical fashion - caught at mid-wicket mistiming a pull.

And when the Warwickshire all-rounder bowled Azhar Ali, Pakistan's hopes of victory were as good as over.

Sarfraz resisted well in a good counter-attacking partnership of 65 with Anwar Ali, but his vigil was eventually ended when Woakes had him caught behind to complete his third-best bowling performance in ODIs.

England captain Eoin Morgan: "It was an excellent performance, quite a commanding one. The most important thing was we learned from our previous performance, particularly with the batting.

"Hales and Roy were outstanding. The opening partnership gave us a chance to put an above-par score on the board."

Pakistan captain Azhar Ali: "England played really well, but we should have chased the total.

"We didn't start well and didn't play the brand of cricket we wanted to play. I take responsibility for that as we didn't get going at the start and that put pressure on the batsmen to come."

England batsman Alex Hales: "It was a very important innings, particularly from a team perspective and the top three. We knew we needed to post a big score and we managed to do that."

BBC cricket correspondent Jonathan Agnew on Test Match Special: "What a transformation. That is a big margin of victory for England.

"There's a lot of relief down there. The coaches would have been pretty angry after the performance in the first match.

"Hales has got a good range of shots. He plants the front foot and goes at the ball outside off stump - that's where he's vulnerable."