England batsman Jason Roy says he needs a substantial score to secure his place at the top of their one-day order.

Roy has a top score of 67 from his 13 ODIs, and followed a duck in the first match against Pakistan by making 54 as England squared the series.

"Pretty 60s and 70s aren't winning you any games so I need to get those big scores and then I hope it will be a bit more of a cemented spot," he said.

The penultimate match of the series takes place in Sharjah on Tuesday. 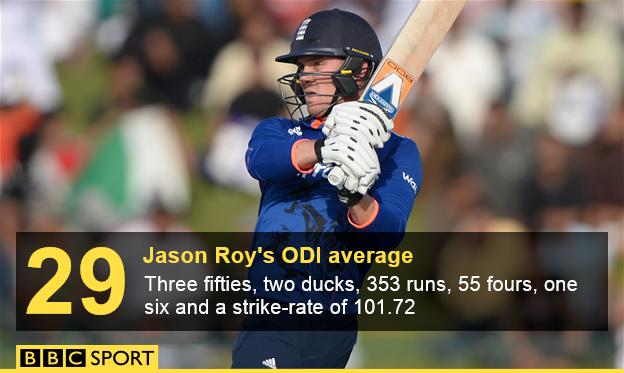 Roy, 25, made his ODI debut in May and has opened with Alex Hales in all 12 of his completed matches to date.

The pair have compiled two century partnerships, recording their highest thus far with 102 in Friday's victory in Abu Dhabi, when Hales struck his maiden ODI hundred in his 22nd match.

"Your mindset is still to be positive and the runs will flow," Roy told BBC Sport.

"The other night, Alex and I didn't really try to go too over the top. We managed to get a couple of boundaries away in most overs and fortunately Alex kicked on, so I'm really proud of him."

Asked whether he felt pressure to reach three figures himself, Roy added: "It's not niggling away at me at all.

"I just train hard and turn up at the game with a positive mindset. If it's my day, it will be my day and I'll get that big hundred. It will be nice to stop throwing away runs."