Australia fast bowler Mitchell Johnson has retired from all forms of international cricket.

The 34-year-old took two wickets on the final day of the drawn second Test against New Zealand in Perth.

"I feel now is the best time to say goodbye," he said. "I have been lucky to have a wonderful career and enjoyed every moment playing for my country."

He is Australia's fourth-highest Test wicket-taker, with 313 in 73 matches, and also took 239 one-day wickets.

Johnson was given a guard of honour by the New Zealand fielders and an ovation from the crowd as he emerged for his last Test innings shortly before lunch on the final day in Perth.

The Waca was his home ground for Western Australia and he also played for his native Queensland.

"It's been an incredible ride," Johnson said. "But the ride has to come to an end at some point and to do so here at the Waca is very special.

"I've given the decision a lot of thought. Beyond this match, I'm just not sure that I can continue competing consistently at the level required to wear the Baggy Green."

Johnson had a good record against England, with 87 wickets in 19 Tests at an average of 25.81.

He was mocked by England fans during their series victory down under in 2010-11 for his wayward bowling. But he was one of the tourists' chief tormentors in Australia's 5-0 Ashes whitewash in 2013-14, during which he bowled with pace and hostility to take 37 wickets at 13.97.

Johnson was also a useful lower order batsman, scoring 11 half-centuries and one century during a career run haul of 2,034.

BBC cricket correspondent Jonathan Agnew watched Johnson in all four of his series against England.

He said: "Johnson was pilloried, his confidence was at absolute rock bottom and everyone thought he was destroyed after the 2010-11 Ashes tour, the nadir coming when he was out first ball with the Barmy Army singing their Mitchell Johnson song at Sydney and really we thought we'd never see him again.

"But the way that he bowled on the last tour in Australia was awesome. It was proper, genuine pace, the type of which you don't see very often these days from a left-arm, slingy approach.

"He was terrifying frankly and he terrified a number of England's batsmen as we know.

"To come back from where he was to perform like that was absolutely brilliant. I'm not sure I've seen a cricketer respond quite so dramatically in Test cricket. 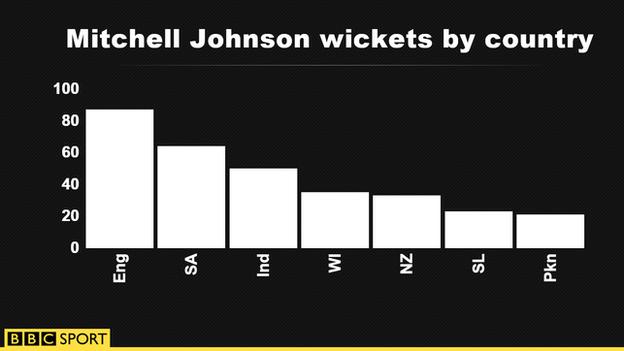 "He did so without any sort of notion of 'up yours' and he still took the banter with the Barmy Army really well. He's clearly a very nice guy who happens to bowl fast and that series was his for sure."

Johnson, who won the World Cup with Australia in March this year, admits he had difficult periods, including the abuse he received from England supporters during the 2010-11 Ashes defeat, the broken toe he suffered in 2011 and being left out of the 2013 Ashes tour to England.

"I had hit a pretty low period in my career, if I'd just walked away I'd have had regrets," he said.

"Coming back from that was probably one of the best moments of my career, proving to a lot of people, including myself, I had that inner strength.

"I was able to enjoy an Ashes series win in Australia, probably one of the happiest moments of my career. I'm really glad I did that."

In his column for the Cricket Australia website, Australia coach Darren Lehmann described Johnson as "a genuine champion, a bloke that we've come to call 'Caviar' after the nation's most famous and most successful thoroughbred.

"It was a joy for me to watch him fulfil his full potential as a player, having seen him develop from an obviously talented youngster in State cricket and always knowing he had very special qualities about him.

"He was also a delight to coach, although he wasn't afraid to challenge me or others if he felt that things could be done differently or better."

India legend Sachin Tendulkar, the highest run-scorer in Test and one-day international history: "Good luck to Mitchell Johnson who has always been a special bowler. Got to know him well at Mumbai Indians and enjoyed his aggressive approach!"

Former Australia captain Michael Clarke: "What an athlete! One of the best I ever played with."

Former England batsman Paul Collingwood: "Bowled rockets and still does!! Congrats on scaring the life out of every batsmen around the world mate, it was great."

Former England captain Michael Vaughan: "All the England lads will be celebrating they won't have to face Mitchell Johnson again in Australia....Great career and a Great man."

Former Australia bowler Brett Lee: "Massive congratulations on a wonderful career. It was incredible to play in the same team as you. Well done mate. Happy retirement!"