Pakistan's Mohammad Hafeez has said he will not play in the same team as disgraced ex-team-mate Mohammad Amir.

Fast bowler Amir, 23, was jailed for his part in a spot-fixing scam during the 2010 Test series in England and banned from cricket for five years.

He returned in September and is playing for Chittagong Vikings in Bangladesh.

Hafeez refused to play with Amir in the Twenty20 competition, saying: "I can't share the dressing room with someone who hurt my country's integrity."

The all-rounder, 35, said he had no "personal issues" with the bowler, who would be eligible for selection for Pakistan's squad to tour England next summer.

He added: "If any other team makes me an offer then I will play the league and I have no problems facing Amir as I have played against him in the domestic matches, but I can't be in the same team."

Asked what his stance would be if Amir was recalled by Pakistan, Hafeez said: "We will look at it when it happens. It's premature to say anything now."

Amir, then 18, pleaded guilty to bowling no-balls at pre-arranged times during Pakistan's fourth Test against England at Lord's in 2010. 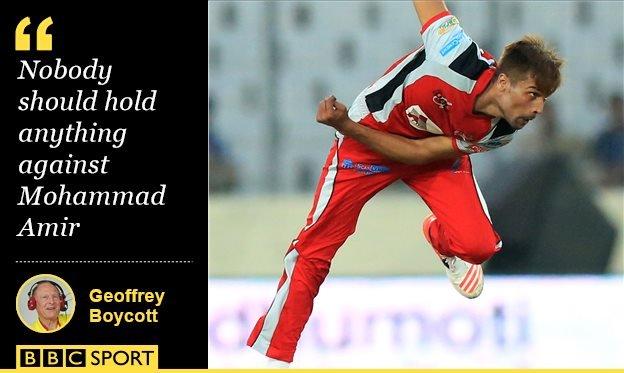 He served half of a six-month jail term, while team-mates Mohammad Asif and captain Salman Butt served six and seven months respectively.

Hafeez said: "They were just banned and went away from the fields. It was us who had to bear the brunt.

"We had to restore Pakistan team's integrity, restore the confidence of the world.

"We had to suffer the taunts of the fans and after 2010 every act, every defeat and every mistake of ours was seen as suspicious, so we overcame that tough time and will not allow it to happen again."

"He has been playing domestic cricket in Pakistan so it's a tournament where he can share the experience of some of the international players and see where he is at the moment," said Misbah.

Former England batsman Geoffrey Boycott said Amir, Asif and Butt should be "given a second chance".

Speaking to pakpassion.net, the 75-year-old said: "Give them a proper chance, get fit, play well and if they are still good enough then give them a chance in the Pakistan team.

"Nobody should hold anything against, or favour, any of the three in any way."

Amir claimed 4-30 for Vikings in Dhaka on Sunday in his first match outside Pakistan in five years.

The Pakistan Cricket Board told Butt and Asif they must complete a "rehabilitation process" before they will be considered for selection.