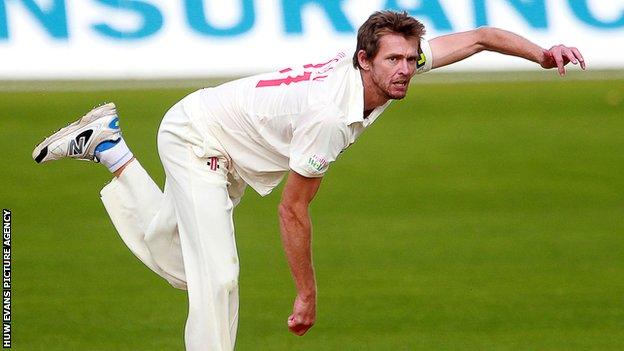 Glamorgan have announced new deals for fast bowler Michael Hogan and spinner Kieran Bull until the end of the 2018 season.

Hogan, 34, who was already under contract for 2016, has agreed a two-year extension with the club.

The Australian has been Glamorgan's leading wicket-taker for the last three seasons since joining in 2012.

Bull, 20, has been handed his first senior professional contract.

Hogan, who is currently preparing for the four-day campaign with Western Australia, did not play first-class cricket until the age of 28.

He has spoken of playing until the age of 40 if his form is good enough.

"I'm really pleased to commit my future to Glamorgan, my family and I are enjoying living in Wales and I have been able to put some performances on the board over the last three years," Hogan said.

"We are determined to build on some encouraging performances in all forms of the game in recent years and hopefully we can kick on again in 2016 and bring some success to the club."

But had his season curtailed by a stress fracture of the back but is looking forward to the new season.

"There's a good balance in the team, with a mix of experience and some younger players, with the senior players always on hand to provide tips and support," Bull said.

Batsmen Chris Cooke and Aneurin Donald also signed until the end of the 2018 season in recent contract extensions.

In addition to the contract renewals, Glamorgan chief executive Hugh Morris has highlighted the need to recruit seam bowlers and a top order batsman for the 2016 season.