England claimed six wickets for just 38 runs on day five of the first Test against South Africa to seal an emphatic 241-run win in Durban.

South Africa resumed on 136-4 in search of a distant 416 but lost four wickets for seven runs in the first nine overs.

Moeen Ali removed dangerman AB de Villiers with the third ball and Steven Finn finished with 4-42 as the hosts were all out before lunch for 174.

The second of the four-match series begins in Cape Town on Saturday.

It was only England's second Test victory away from home since 2012 and their largest in terms of runs against South Africa since the Proteas were readmitted to international cricket in 1991.

In contrast it was a fourth defeat in the past five Tests for South Africa, whose position at the top of the Test rankings is under increasing threat from India.

The South Africans have gone seven matches without a Test victory, which equals their longest run without a win since their readmission.

In the 138-year history of Test cricket, only three teams have avoided defeat from being four wickets down on the final day.

And it soon became apparent South Africa would not alter that statistic when star batsman De Villiers missed a turning off-break from Moeen and was given out lbw and upheld on review. 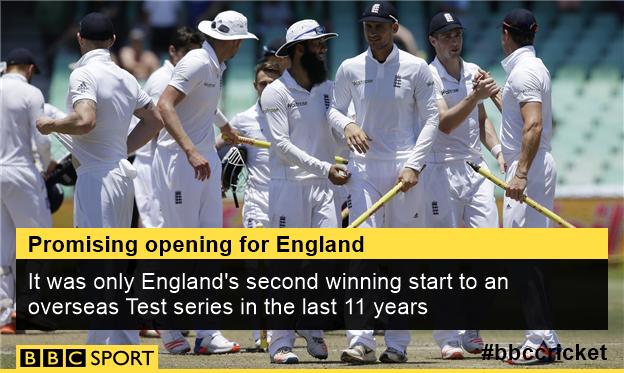 England captain Alastair Cook said: "The lads played really well. It was tough to bat but the way Nick Compton played after being out of Test cricket for a while, he was a rock in the first innings to give us a platform, and then we bowled well in both innings.

"The bowlers mixed their pace and were relentless. It's pretty easy to captain because you know they will deliver.

"It's our first away win for a long time so we will enjoy this but we know what a strong side South Africa are at home."

Former England spinner Graeme Swann described the De Villiers wicket as "massive for Moeen, because he will have gone to bed very nervous that people expect him to win the game".

Having made that crucial breakthrough, Moeen produced another wicket maiden in his next over, drawing Temba Bavuma out of his crease and allowing Jonny Bairstow to atone for his spurned leg-side stumping of De Villiers on day four.

Bairstow calmly whipped off the bails to record England's first stumping for 38 Tests, since Mumbai 2012.

Chris Woakes captured his first wicket of the match when Dane Piedt was caught off the inside edge onto the pad and fittingly the final wicket went to Stuart Broad, who took 4-25 in the first innings.

After an hour and three quarters of play on the final day, Broad pinned last man Morne Morkel lbw to claim his 320th Test wicket.

Moeen, who finished with match figures of 7-116, who was named man of the match.

Victory against West Indies in Cape Town at the beginning of 2015 was South Africa's only Test success of the year, and they lost four and drew three of their other matches.

The Proteas scored 421 against the Windies in Cape Town in January but did not reach 250 again in 10 completed Test innings in 2015.

Former England batsman Geoffrey Boycott told BBC Test Match Special: "I thought it would be close this series. South Africa look as if they're past their best, with injuries not helping. They dropped three catches in no time when they were under pressure.

"They've got real problems. I don't know if the technique of the South Africa batsmen is good enough to stay in against good bowling."