England were in danger of wasting a good platform on the first day of the second Test against South Africa until Ben Stokes got going late on.

The tourists closed on 317-5 and, with a lot of batting to come against an inexperienced South African attack, they could still get a total that takes the home side out of the game.

However, if they do, they will have done it the hard way, because the first-day performance with the bat was below their best, with too many players getting in, then getting out.

All the talk surrounding England after their convincing win in the first Test concerned the prospect of them finding some consistency, particularly with the bat. Could they nail another good performance to put this series out of South Africa's reach?

On this first day in Cape Town, they had the opportunity to do just that after winning the toss and batting first in ideal conditions on a good pitch.

But too many of the top order - Alastair Cook, Alex Hales, Nick Compton and Joe Root - did the hard part and then got out.

England want to play freely and busily, they want to be ticking along and that is a fair enough approach.

But allied to that is the need to build a careful platform, especially when so many things are in your favour. In these conditions, four wickets down at the close would have been about right, so it can be argued that England lost one too many.

That they ended the day with the upper hand was thanks to Stokes who, after a relatively lean spell, once again showed what a fine cricketer he is with an unbeaten 74.

The Durham man is a proper all-rounder, always ready to contribute with bat and ball. If one part of his game isn't firing, then he will probably deliver with the other. On top of that, he is a brilliant fielder.

Stokes is a fierce competitor and he further demonstrated that in the way he shredded the second new ball late in the day.

South Africa had built up to that point, putting all their eggs in one basket in the hope that more wickets would come. For Stokes to then smash the ball around must have been pretty deflating.

Yes, he took a chance, but he also created his own luck. He forced South Africa to remove their catchers and go on the defensive. 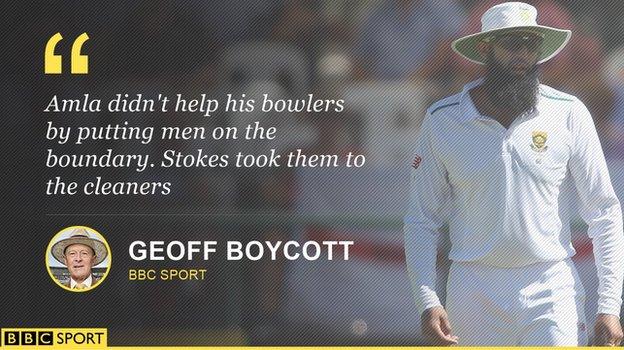 It is performances like this that show Stokes to be a rarity in the world game. It's hard to think of many Test sides that have a genuine all-rounder in their ranks - Australia's Mitchell Marsh and Sri Lanka's Angelo Mathews are the only others that come to mind.

That dearth of all-rounders shows just how lucky England are to have Stokes at their disposal.

While Stokes has his career up and running, Hales is a man who is looking to do just that.

After he made his debut in the first Test in Durban, I spoke of his need to learn from his mistakes, namely a waft outside off stump and a needless big shot.

He did to some extent, making a maiden Test half-century, but there was some more uncertainty in the off-stump area.

South Africa captain Hashim Amla got it quite wrong, opting for a deep square leg instead of a third catcher in the slips, especially when Hales was edging his way through the 40s.

If I was an opposing captain, I'd use a packed off-side field to Hales and ask my bowlers to bowl a foot wide, because he will go for the ball eventually.

That being said, he's got promise because he does hit the ball so well. He has played some wonderful innings in limited-overs cricket and he deserves credit for his effort here, where he got through the first session, made 60, then was pretty blameless in edging a good delivery from Morne Morkel. 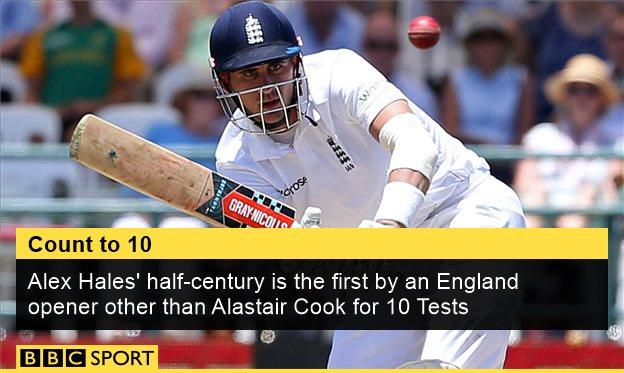 Yes, Hales has the potential to get out in frustrating ways, but he could also be very destructive for England if he finds his feet at Test level. He should be judged after this series.

The mistakes against Hales were not the only time that Amla was guilty, with the South Africa skipper again just letting things happen, allowing the game to drift.

That being said, he does have an inexperienced attack to work with, but pace bowler Kagiso Rabada impressed in only his fourth match, taking 3-74, including two wickets in two balls.

The 20-year-old has a nice action, bowls with decent pace and could be even quicker if he uses his left arm more.

It was the pace bowlers who shared the five wickets for South Africa today, but the most telling delivery may have been bowled by off-spinner Dane Piedt.

Some sharp turn fooled Jonny Bairstow, who was beaten between bat and pad and fortunate not to be bowled.

That shows this is a dryish pitch that could turn more as the game wears on. The amount of runs the side batting last would feel comfortable chasing should be adjusted down accordingly.