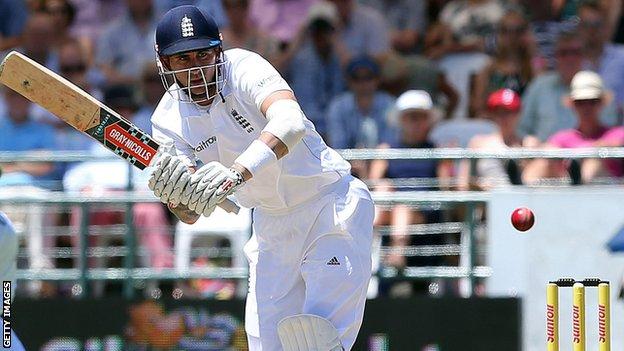 Alex Hales has done enough to keep his place in the England side, according to his county coach and national team selector Mick Newell.

The 27-year-old Nottinghamshire opener scored 60 in the drawn second Test against South Africa.

Newell told BBC Radio Nottingham: "He wants to establish himself as the long-term successor as an opening partner to Alastair Cook.

"I think there were signs in that first innings in Cape Town that he can do."

England's second opening place has become a headache for the selectors, with captain Cook having eight different partners since Andrew Strauss retired in 2012.

Hales averages 25.25 after scoring a total of 101 in his four Test innings so far, but Newell is confident he can improve on that.

"Opening the batting is a pretty tough job and when Dale Steyn is playing, you are playing against the world's best bowler," he said.

"Alex is having to get stuck in and curb some of his natural instincts to score.

"He is certainly doing enough to stay in the team, but I think he wants to do more than that.

"He will want to come out of the series with some more good scores. He will be continually tested on two faster pitches as they move inland.

"If he does grab this opportunity I think it will be great for him, and good for England."