England batsman Alex Hales could miss the third Test against South Africa in Johannesburg because of a throat infection.

The tourists, who lead 1-0 in the series, will decide on the opener's fitness on Thursday before the toss.

Many of his team-mates have suffered from stomach bugs.

"Nick Compton and Chris Jordan suffered worst," said captain Alastair Cook. "Everyone else hasn't felt quite right at some point."

Hales, 27, who scored his maiden half-century in the drawn second Test at Cape Town, trained alone in the nets on Wednesday morning before returning to his hotel room to rest.

If he fails to recover, England are likely to promote Compton to the top of the order and bring in Gary Ballance at number three.

England will win the four-match series with victory at the Wanderers, where South Africa will be led by AB de Villiers.

Hashim Amla, who scored a double hundred at Newlands, has stepped down as captain and been replaced by one-day skipper De Villiers.

"It's an exciting time to play and we are in a really good position," said Cook.

"The next two games are probably both on result wickets, which means we need to win one of them to win the series.

"That's a great situation to be in. To win away from home, especially against the top-ranked team in the world, is particularly hard, so the guys are buzzing."

Asked about Amla's decision to step down mid-series, Cook said: "It's a huge honour to captain your country, but if you don't feel you're the right man for the job or you're not enjoying as much as you should, it's better for South Africa that he's strong enough to make that decision.

Read more: De Villiers 'not sure' about future as captain

Despite Dale Steyn's continued absence with a shoulder injury, South Africa are set to have an all-pace attack at the Wanderers after releasing off-spinner Dane Piedt from the squad.

Piedt and reserve batsman Rilee Rossouw will instead play for their franchise teams before rejoining the squad for the fourth Test in Centurion.

The stats that matter 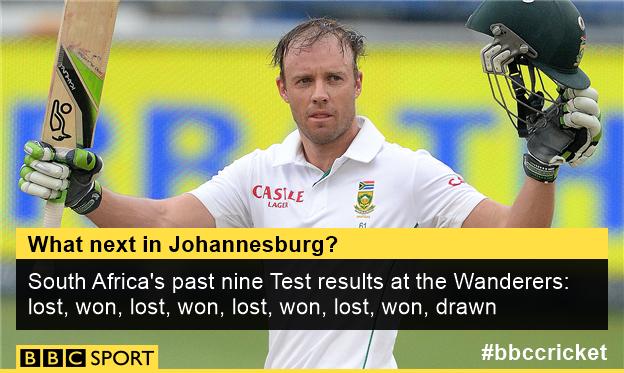