An injury to Quinton de Kock on the eve of the third Test against England saw South Africa start the match without replacement Dane Vilas at the ground.

De Kock, 23, slipped and twisted his knee while at home on Wednesday.

Vilas was set to play a domestic match in Port Elizabeth, but flew to Johannesburg on Thursday morning.

Cricinfo reported Vilas boarded a 100-minute flight at 08:40, with the 30-year-old arriving at the Wanderers 45 minutes after play began. 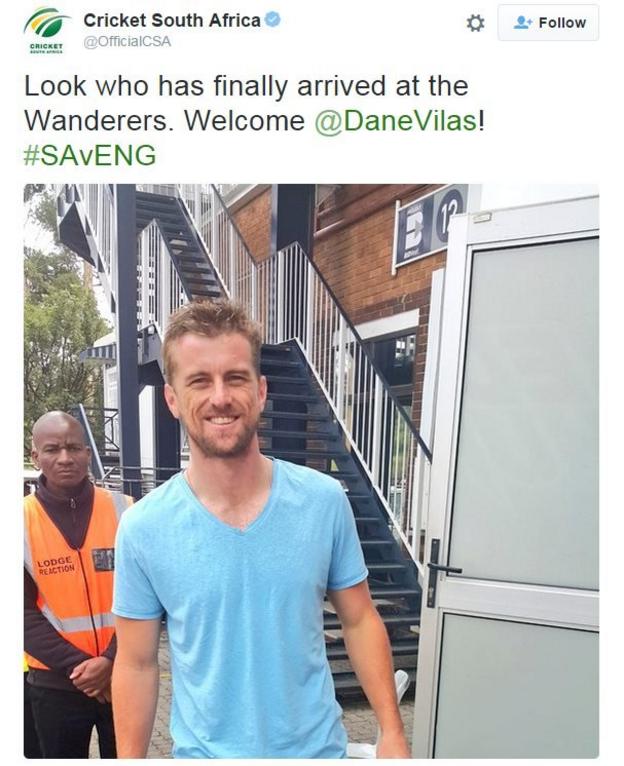 However, De Kock's injury denied the Proteas, who are 1-0 down in the four-match series, the opportunity to rejig their batting line-up.

De Kock may have been promoted to open the batting, allowing batsman JP Duminy to bat at number seven and bowl some off-spin.

Without De Kock, Stiaan van Zyl continues to open, Vilas will bat at seven and the home side have only the part-time spin of Dean Elgar to complement a four-man pace attack.

"De Kock's injury happened yesterday afternoon. He was hoping to run it off but he woke up just after midnight and the knee was very swollen, so he didn't inform team management until this morning."

News of South Africa's predicament led to a discussion on BBC Sport's live text commentary of occasions when you have been 'caught on the hop'.

Mark Horner, via email: "Back in the early nineties, our team was playing away at a new club to the league. Two cars got lost and we only had six players at the due time. The opposition refused to wait and were about to claim the win.

"My wife, who had come as a spectator and who was eight months' pregnant, waddled onto the field and said 'play'. At that time, she was the only woman registered to play in that league and it meant we had the minimum seven players. The opposition were stunned... and so were we.

"The game started... our other players turned up half an hour into the game... and we won! Wife was the toast of the club."

Andrew and Will Odell, via email: "I was playing in the same team as my brother. The opposition batted first and then it was our turn to bat. I was opening the innings and my brother was number 11.

"Obviously he thought he had plenty of time to go to the toilet. However, when he returned to the match he was not only horrified that we were all out for 11, but also that he had been timed out."