Hampshire's Reece Topley hopes solid performances during England's limited-overs series in South Africa will earn him a trip to the World Twenty20.

Topley, 21, is looking to build on his five one-day and two T20 international appearances in the forthcoming series.

The left-arm seamer also has an eye on making the squad for the T20 tournament to be held in India in March.

"It would be a massive honour to represent your country at a World Cup," he told BBC Radio Solent.

Topley, who moved to Hampshire from Essex in September, was part of England's one-day and T20 squad which beat Pakistan in the UAE in November.

But, despite impressing in both series, he is staying focused about his long-term international ambitions.

"You never look to take things for granted," he said. "I certainly wouldn't like to say that I've accomplished that much, as you never know how many times you're going to pull on an England shirt.

"I think that's the way to be, staying level-headed and never taking a game or a tour for granted." 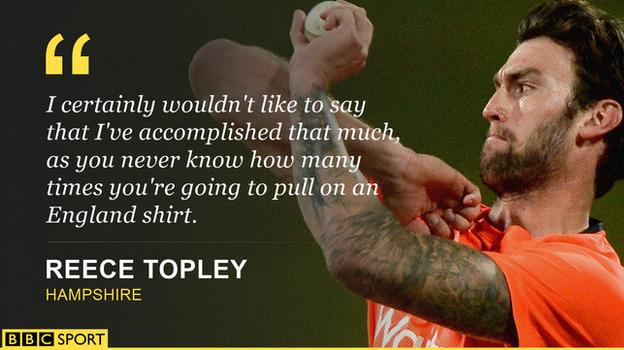 Topley, who departs for South Africa, has had a busy winter, having also played for England Lions in a T20 series against Pakistan A in December.

A year ago, he was recovering from a stress fracture in his back, which ruled him out of the Lions tour of Sri Lanka.

"So much has changed over the last year," Topley added. "I wouldn't have thought that I'd be sitting here now playing for Hampshire and having played numerous games for England.

"It's quite surreal and honestly, I never forget how lucky I am to have done what I have so far.

"Fingers crossed, it's not finished and there's a lot more to come."