It was always going to be a challenge for both England and South Africa to adjust to the conditions of the third Test in Johannesburg.

Neither have experienced anything like it for months, particularly on their respective assignments before this series - England in the UAE to play Pakistan, South Africa on tour in India. In those Asian nations, pitches were slow and lifeless.

Now, at the Wanderers, batsmen can find the ball rising to the height of their throats from just short of a length. It is difficult.

And yet, South Africa will be disappointed with their first-day batting effort. It is hard to put a score into context until both teams have batted, but it certainly is not a surface where a team should find themselves 225-7 as the Proteas did soon after tea.

They got the boon of an unbroken stand of 42 between eighth-wicket pair Chris Morris and Kagiso Rabada, but, even at 267-7, England could still wrap up the innings for less than 300 on day two.

What makes it worse for South Africa is that they had such a good start. It was brave for AB de Villiers to bat first given the grey overhead conditions, but the home top order looked like proving their new captain right.

They knuckled down, were intent on getting in and accustomed to the conditions. Yes, Stiaan van Zyl played an odd pull shot at Ben Stokes - more on odd pull shots in a moment - but then Dean Elgar and Hashim Amla batted very well.

Amla, though, was the only batsman who England had to get out. He edged a lovely delivery from Steven Finn, leaving the rest to fall to misjudgement, poor shots and, yes, those pull and hook strokes.

Four in total were caught on the leg side, including De Villiers, one of the best players in the world. If you are not used to the bouncy conditions, then pull and hook strokes can lead you to be rushed. When you don't get into the correct position, then the ball will be skied. That is exactly what happened.

To make it worse for South Africa, England really did not bowl well in the early helpful conditions.

James Anderson is still not right after his calf injury and Stuart Broad looked unwell, so they were not at their best.

Bowlers, like batsmen, have to adjust to the bouncier surface, pushing their length fuller as a result. England neither got it full or straight enough, meaning the South Africa batsmen did not have to play. 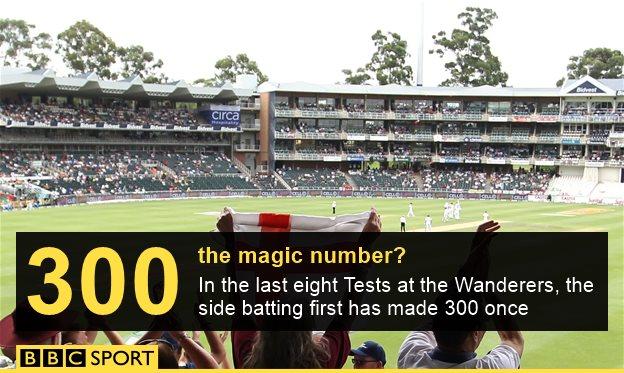 However, England have a knack of tying the game down, or keeping the opposition in check even when they are not taking wickets. Very rarely do opposition batsmen run away from them.

Therefore, when wickets come, especially if they are in quick succession, England rapidly find themselves back in a position of strength.

With Anderson and Broad not performing, the resurgence was led by Stokes and Finn, with the latter impressing as the pick of the bowlers all day. This sort of surface is ideal for a bowler like Finn, with his good pace and brutal bounce.

This is another area where England will have a slight edge. They now have four pace bowlers that are pretty experienced in Test cricket - Stokes is playing his 22nd match.

In contrast, South Africa have the excellent Morne Morkel, but the rest of their quartet have eight caps between them. How will they adapt when they come to bowl on Friday?

England have to make that work to their advantage, to not make the mistakes that South Africa have and not gift their wickets away.

They have to get their heads down, get used to the bounce and make the bowlers work hard. They must remember that even if it is tricky when they first arrive at the crease, this is a lovely pitch on which to bat if you get in. The ball comes on to the bat and you get value for the shots you play.

England's plan will be to wrap up the South Africa innings as quickly as possible on the second morning, then apply themselves for as long as possible with the bat.

If they can do that, they will move closer to a first overseas series win since 2012.