England's victory in the third Test against South Africa in Johannesburg was quite remarkable.

They began the third day 75 runs behind with five first-innings wickets in hand. For them to win on the same evening is not quite unprecedented, but certainly highly unusual, especially in the age of covered pitches.

At lunchtime, South Africa were basically level with all 10 wickets intact. It was their opportunity to bat England out of the game. Instead, less than two sessions later, they were beaten. It was incredible.

The catalyst for it all was Stuart Broad. As soon as he starts lifting those knees up and running in hard, batsmen are in trouble.

His 5-1 in 31 balls is the seventh time he has taken five wickets in a single spell of bowling. Those are match-winning performances.

He was helped by conditions - the clouds hung around, the floodlights were on all day, the new ball was venomous and brutal. But the bowler still has to put the ball in the right place and, in those circumstances, Broad is a formidable man to face.

It wasn't just the deliveries that took wickets that were dangerous - some were flying past the nose, others were crashing into flesh. South Africa will not only be suffering the pain of defeat, but also the bruises of leather on skin.

These spells that Broad bowls - The Oval in 2009, Chester-le-Street in 2013, Trent Bridge in 2015 and now here - are symptomatic of his character. If your team is in a situation where someone needs to stand up and be counted, then Broad wants to be that man.

He uses all of his 6ft 6in to get bounce, but also swings and seams the ball as well. He's accurate, so builds pressure. On top of that, he loves to get in your face and under your skin.

Broad, though, is just one of the players capable of turning a Test for England. In fact, I'm willing to stick my neck out and say that it is unusual for England to be blessed with so many match-winners. 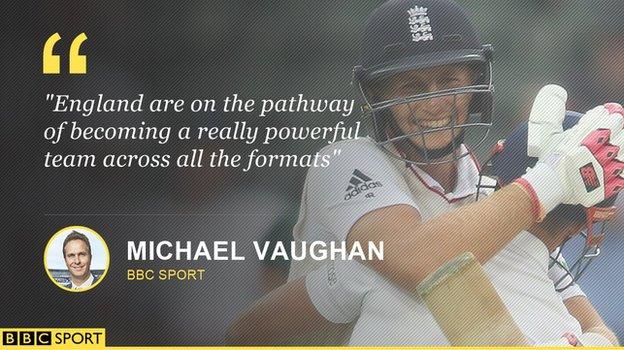 Broad, Ben Stokes and Joe Root can all turn the momentum in a session. We know what a fully fit James Anderson is capable of and Steven Finn showed during the Ashes that he can bowl a magic spell.

This ability to turn a Test from a position of peril began for England back in the summer. On the first morning against New Zealand at Lord's, England found themselves 30-4, only for Root and Stokes to counter-attack.

For years, England had it done to them - think of the havoc that Australia's Adam Gilchrist used to cause. Now, England are doing it to other teams with a great deal of flair and courage.

They are a team on the up and one I fancied to beat South Africa, who, in contrast, are a team in decline.

The Proteas may have started the series ranked number one, but we knew they were no longer the world's outstanding team. Yes, they have been deprived of Dale Steyn and Vernon Philander - and it is a shame that England did not have the chance to beat a full-strength South Africa - but that might not have made a difference.

South Africa simply did not have the chance to get over their humbling in India and therefore carried the scars into this series. England had the opportunity to draw a line under their defeat against Pakistan in the UAE, a series where they far from disgraced themselves.

Looking ahead, England have two home series in the summer that they should win. The last time Sri Lanka were in England, they won, so Alastair Cook has a score to settle there and some ranking points to win back.

You never know which Pakistan will turn up, but England will again be favourites. They then go to Bangladesh, which will be good preparation for a formidable trip to India, the new world number ones. Then again, England won the last time they were there too.

These things go in cycles and, in English cricket, we tend to look forward to the Ashes as a marker and a time to be judged.

The next date with Australia is at the end of 2017, down under. Almost two years out, England look well-placed.