Chris Gayle hit a 12-ball half-century to equal the record for the fastest fifty in Twenty20 cricket, but could not prevent Melbourne Renegades from going out of the Big Bash League.

Gayle hit seven sixes to equal the mark of India batsman Yuvraj Singh against England at the 2007 World Twenty20.

He was out five balls later for 56.

Needing to surpass Adelaide Strikers' 170-5 in 15.5 overs or less to reach the BBL semi-finals, the Renegades were bowled out for 143.

The Strikers, including England leg-spinner Adil Rashid and coached by Yorkshire's's Jason Gillespie, top the group and advance to the last four, where they will face Sydney Thunder on Thursday.

In the other semi-final on Friday, up to four England internationals could be on show as Melbourne Stars face Perth Scorchers.

The semi-finals and final will be played as double-headers with the Women's Big Bash League.

For Gayle, the Renegades' exit ends a Big Bash campaign in which he attracted criticism for comments he made to TV reporter Mel McLaughlin.

The former West Indies captain asked McLaughlin out on a date during a live interview and later apologised.

The 36-year-old already holds the record for the fastest T20 hundred, made off 30 balls for Royal Challengers Bangalore in the Indian Premier League in 2013. 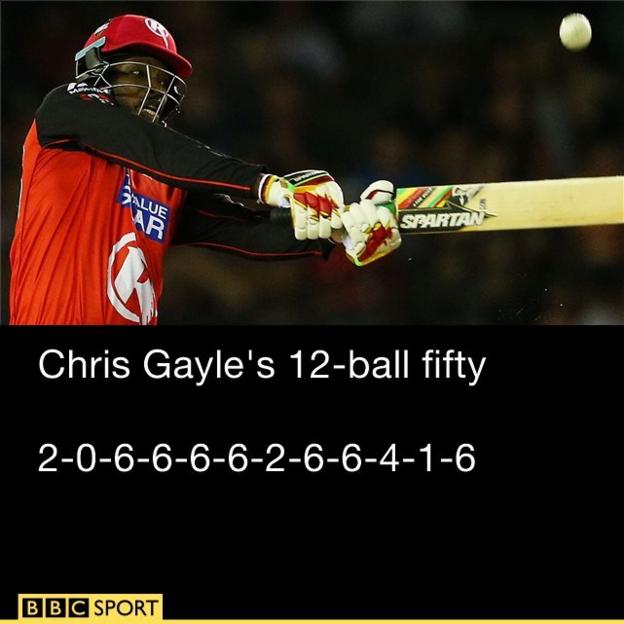