The Big Bash League has become arguably the most talked-about cricket competition in the world.

While England have been winning a thrilling Test series in South Africa in front of plenty of empty seats, Australia's domestic Twenty20 tournament has drawn record crowds and huge TV audiences.

Is the hype justified? Should England follow suit? And what does it all mean for Test cricket?

How big is the Big Bash?

Perhaps the greatest indicator of the BBL's success is the speed with which it has barged its way to the centre of Australia's congested sporting summer.

Thanks to record crowds and TV figures - and a dose of controversy, thanks to Chris Gayle - this season's edition has been front and back page news in Australia and beyond.

It has jumped into the top 10 best-attended sports leagues in the world, with an average crowd of 28,906 over the group games and semi-finals, including a record 80,883 for the Melbourne derby at the MCG on 2 January.

Perhaps most impressively, the Big Bash's target audience - those who have never watched a cricket match before - is not just being tapped, but hammered.

The free-to-air coverage of the Big Bash on Network Ten has raked in one million viewers per game for the first time and is dominating its timeslot.

Averages attendances are up 4,710 up on last season, which itself were 4,757 up on the previous summer. The juggernaut keeps rolling on.

How have the Aussies managed it?

Australia replaced its six state sides with eight city-based franchises, with two teams in each of its biggest markets, Melbourne and Sydney. This meant rivalries and city derbies.

"We looked at examples around the world of big cities with two teams, whether that's Manchester or Los Angeles," says Anthony Everard, head of the BBL.

"We wanted to make sure the teams didn't look and feel the same. In Melbourne, the Stars are presented as slightly more establishment and the Renegades a bit more rebellious, which plays out in their in-stadium experience."

As well as the competition itself, even events during a match are sponsored in the Big Bash:

After two seasons on pay TV with Foxtel (which only 23% of Australians have access to), free-to-air broadcaster Network Ten bought the rights to the competition for Australian $20m (£9.85m) per year for the next five seasons.

Cricket Australia's theory is that the competition is their "gateway drug" for new fans.

The BBL is a gimmick-fest. The stumps flash, almost everything is branded and the competition's carry-on can feel almighty naff.

"We particularly looked at American sports because of the real focus on fan engagement and the game being staged for the fans," says Mike McKenna, Cricket Australia operations manager.

"All that stuff is there, for kids to go, 'Jeez, something's happened'. It makes them excited and draws them back into the game."

'Rashid is a superstar' - the Brits abroad

The success of English players has been a conspicuous element of this year's tournament. Adil Rashid, David Willey, Big Bash stalwart Luke Wright and, yes, Kevin Pietersen, have been consistently impressive.

England and Wales Cricket Board (ECB) director of cricket Andrew Strauss made the decision to send Rashid and Willey to Australia rather than carry drinks for the Test team in South Africa.

Rashid took 16 wickets at an average of 14 - only Clint McKay has more - and was described by former Australia captain Ricky Ponting as the player of the tournament as Adelaide Strikers reached the semi-finals. His skipper, Brad Hodge, preferred the term "superstar".

"I love the crowds," says Rashid. "We don't get crowds like that back home. To be having more than 40,000 people regularly is a great buzz and gets you right up to the challenge.

"It makes it great fun for the players. The cricket here's been a great challenge, and it's cool to have everyone talking about the competition."

Strauss is keen, when the international schedule permits, for "a lot" of England players to sample the Big Bash and the Indian Premier League.

"There are 50,000 people watching and it's over to you to deliver - that's what you're getting paid for," he says.

"You're out of your comfort zone and, as a personal development thing, it takes us much closer to where we want to be in the run-up to the 2019 World Cup."

Sussex and Melbourne Stars all-rounder Wright says: "You're being brought in as a hired gun. I don't think people realise, until you're an overseas player, the sort of pressures on you."

What about the Women's Big Bash?

This year, a Women's Big Bash League was set up to mirror the men's competition, with Cricket Australia's McKenna claiming: "The mantra is that it matters to inspire girls to play cricket."

Channel Ten agreed to televise eight games on their digital sister One. They were so popular that more fixtures were added - and even moved to the main channel.

The exposure for women's cricket has been "incredible", according to Australia and Perth Scorchers batter Elyse Villani.

Lisa Sthalekar, who came out of retirement to play for Sydney Sixers, says: "If you said 12 months ago that extra matches would be televised with 200,000 viewers and there would be record crowds, we would all have taken that."

The England and Wales Cricket Board, which is launching a franchise-based Women's Super League this summer, will be hoping for a similar impact.

Should the ECB copy it? 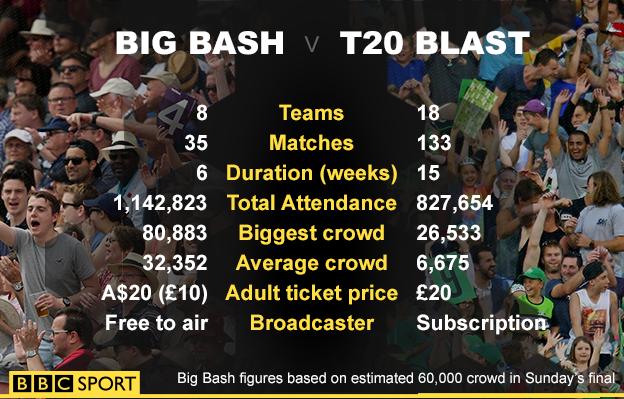 "The more I watch the Big Bash the more jealous I get that we can't just stop being so stubborn and precious, and accept we need one," says former England captain Michael Vaughan.

An ECB delegation, led by chief sales and marketing officer Sanjay Patel, has been in Australia analysing the Big Bash.

Unlike the BBL, the T20 Blast is spread throughout 15 weeks in the summer, largely on Friday nights. It is not broadcast free to air - only a quarter of games are on television at all - and the season has 133 games, compared to the BBL's 35.

"Every game feels like a final because there aren't many," Rashid says of the Big Bash. "There's a buzz about every fixture that maybe isn't there for games at home."

While the T20 Blast's format has been decided for this summer, it may be restructured again from 2017.

Yet it is not quite as simple as copying Australia, which has several advantages.

The Australian summer coincides with school holidays and Christmas and New Year, while the weather helps create better pitches and allows for warm evenings for floodlit games.

Australia is a more urbanised society, suited to city-based teams. The eight BBL teams cover 60% of Australia's population, but the 10 most obvious locations in England - London (two), Birmingham, Bristol, Cardiff, Newcastle, Leeds, Manchester, Nottingham and Southampton - would cater for only 23% of people in England.

There is the added complication that several of the 18 first-class counties will miss out if the T20 Blast becomes an abbreviated franchise competition.

Kevin Pietersen, the former England batsman who is now a T20 specialist, says a "smaller, condensed tournament will improve the competitive element, keeping more teams interested for longer and driving up the standard".

"Cricket is changing. As a sport, we've got to adapt," says Jason Gillespie, the former Australia bowler who coaches Yorkshire and Adelaide in both competitions.

"The Big Bash is unbelievable - different gravy - and as much as I love the T20 Blast, there's a general consensus that it can be even better."

Is Test cricket really in danger?

This year's Boxing Day Test at the MCG, between Australia against West Indies, saw its lowest crowd in 21 years, 127,069 across four days.

A week later, the Melbourne derby alone pulled in 80,883. On two occasions Hobart - where the capacity is just 16,200 - had more fans at a BBL game than across the three days of their Test in December.

However, Channel Nine's figures for international matches still dwarf Network Ten's coverage of the Big Bash, so there is still a sizeable audience for Test cricket.

Pietersen has argued that being a T20 freelancer is "the easiest gig in the world" and that more players will take this route because you work less, earn more and play in front of bigger crowds.

Asked about the prospect of players choosing lucrative T20 cricket over representing their country, Australia and Melbourne Stars seamer John Hastings said: "If we get to that stage we're going in the wrong direction."

BBC cricket correspondent Jonathan Agnew adds: "T20 is cricket's marketplace; it's where more people are exposed to the game.

"People rush to compare Test to T20 cricket and say that, because the big numbers don't come to watch, Test cricket is finished. It's not at all.

"It's just a different form of the game that is still immensely popular - even if people aren't at the grounds because they have to go to school or work."

Cricket Australia's McKenna says: "There's plenty of room for everyone. That's our aim - a situation whereby all Australians love the game of cricket. Who really cares which type?"