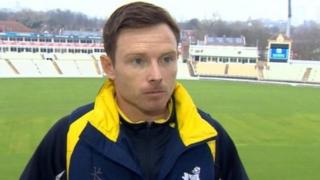 "At the start of the season it looks like I'll be around a lot," he told BBC Midlands Today.

"It's important not to think about the England situation too much. But I still have massive England ambitions. I have made it very clear that I want to get back in and the club have been very supportive.

"There have been some fantastic Warwickshire captains in the past and the responsibility is huge. To get the phone call to be asked was a real honour."