South Africa bowled England out for 101 on the final morning to seal a 280-run consolation victory in the final Test.

The hosts needed only 66 minutes and 82 deliveries to take the remaining seven England wickets in Centurion.

Kagiso Rabada, 20, became the youngest South Africa bowler to take 10 wickets in a match, and finished with 6-32 to add to his first-innings 7-112.

Morne Morkel claimed 3-36, with James Taylor's 24 the highest score for England, who won the series 2-1.

England, beaten 2-0 by Pakistan in the United Arab Emirates earlier this winter, next play Test cricket against Sri Lanka at Headingley on 19 May.

All over in under a session

Having reduced England to 52-3 on Monday, South Africa hurried through the rest of the order thanks to some splendid bowling on a wearing surface.

In all, England lost their last seven wickets for 43 runs in 10.5 overs as any hopes of batting out the day vanished amid a flurry of reckless strokes.

Here's how the collapse unfolded:

Rabada wraps it up in style 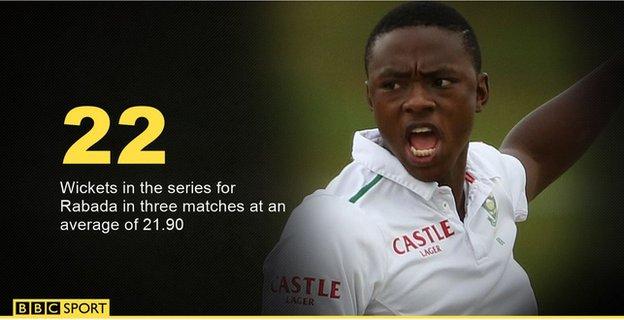 Fittingly, the lithe paceman, in only his sixth Test match, took the final three wickets as England were skittled out before a drinks break was required.

That gave Rabada match figures of 13-144, the best by a South Africa bowler on home soil and the second-best in their history.

The man of the match, who was also the leading wicket-taker in the series, said: "It was a bit up and down so the key was the hit the deck and bowl the ball in a good area and I believed you'd get your rewards."

'England have shown no heart' - what they said

Former England captain Michael Vaughan told BBC Test Match Special: "England have batted on a pitch with a bit of spice and they have shown no heart.

"It's almost like the white towel has been thrown in. It was a really feeble way to finish the tour."

Former England batsman Geoffrey Boycott: "Get your head down and save the match. But there was no effort this morning.

"Coming out and playing shots, does that excuse you after winning the series? No. There's no excuse for that. You have to be professional. That's not good enough."

England captain Alastair Cook: "We always try and play positively but on certain wickets you have to play a different way. We didn't get the balance right.

"Whether that's the end of the tour mentality I don't know. If you'd offered me 2-1 before the series I would have snapped your hand off."

Stats you may have missed

What next for England?

England face a South Africa Invitation XI in a warm-up game on Saturday before a five-match one-day series against South Africa gets under way on 3 February.

Proteas pace bowler Dale Steyn will play no part in the ODI campaign as he continues his recovery from the shoulder injury which kept him out of the third and fourth Tests.

The sides also meet in two Twenty20 internationals on 19 and 21 February.