Earlier this month, the 36-year-old was fined £4,900 after asking a TV reporter for a date in a live interview while playing for Melbourne Renegades in Australia's Big Bash League.

He later apologised but said the reaction was "out of proportion".

Gayle, whose first game is on 1 June against Sussex, scored 328 runs in three appearances for Somerset in 2015.

The final match of his six-game stint will be against Hampshire on 19 June.

Gayle said: "I really enjoyed my time at Somerset last year. It's a great club and the supporters were absolutely incredible.

"I'm looking forward to seeing the fans again and to scoring some more runs. Hopefully I can help the club make it through to the later stages."

Somerset's director of cricket Matt Maynard previously described Gayle as "box office" and suggested Somerset sold out their seven T20 Blast games last year "essentially on the back of him signing".

The left-hander hit a 12-ball half-century to equal the record for the fastest fifty in Twenty20 cricket before Renegades exited the Big Bash earlier this month.

Somerset's chief executive Guy Lavender said they may be able to bring Gayle back to Taunton if they qualified from the group stage. 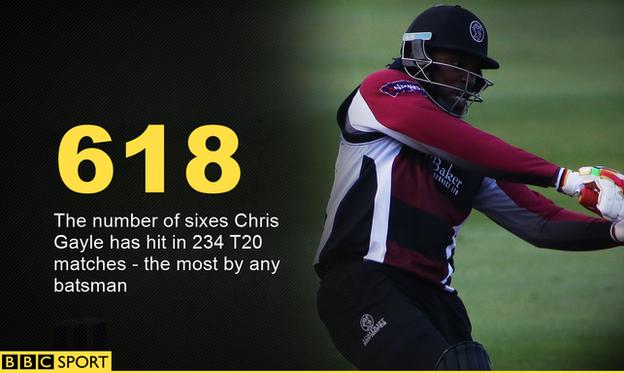 Somerset's newly-appointed County Championship skipper Chris Rogers has made it clear he's not the biggest fan of his former Sydney Thunder team-mate Gayle.

"From my time at the Thunder I was very disappointed in his attitude and his behaviour," Rogers said on 5 January. "I've never been a fan since.

Rogers has replaced Marcus Trescothick as captain for the four-day competition, after he stepped down from the role last week.

However, Gayle will not play under Rogers directly as Jim Allenby is the club's one-day captain.

'He made a superb impression'

Gayle has earned the backing of Maynard despite Rogers' criticism of his time with the Thunder.

The former Glamorgan batsman said the West Indian had got on well with everyone during his time with Somerset last summer.

"He obviously didn't leave a great impression there, but he did here," Maynard told Points West.

"He made a superb impression on the fans, on the players, on the town itself. He was so well thought of and that's what you go on.

"I know there will be no issues between him and Chris Rogers. They are both grown men and they will get on fine."