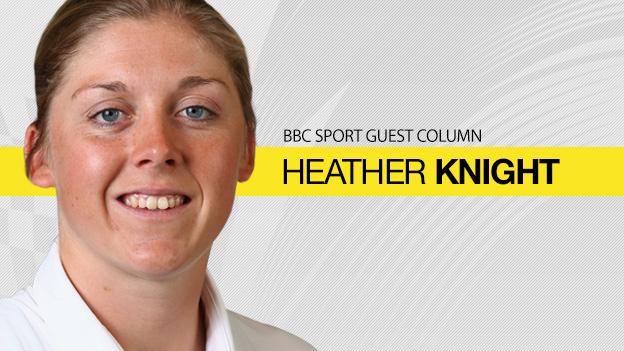 England vice-captain Heather Knight is writing another series of columns this winter. Having played in the inaugural Women's Big Bash League, she is now in South Africa with England for their limited-overs series which begins on Sunday, 7 February.

So, after a two-month stint in Australia, the Women's Big Bash League (WBBL) has finally come to an end, and I'm back on England duty in sunny South Africa.

It's great to be back with the team - everyone is ready and raring to go with what is set to be a pretty big 2016, starting here with three one-day internationals and three Twenty20 internationals against South Africa.

One of the big things on the immediate "to do" list for the girls that have come straight from playing in the WBBL has been to meet our new head coach Mark Robinson. A lot of the girls (me included) had never met Robbo before and we're all really excited to start this new era for the team. A fresh start is never a bad thing, and we are now focused on what's ahead of us.

Learning from the Women's Big Bash

It's fair to say the inaugural WBBL was a pretty big success. People came to watch, particularly in the double-header fixtures alongside the men's Big Bash League (BBL), the competition was well publicised, and there was some great cricket played.

For Hobart Hurricanes, our season unfortunately ended in a rain-affected semi-final defeat at the MCG. It was a disappointing way to go out, but having been written off without a ball having even been bowled as 16-1 rank outsiders for the tournament, it was quite an achievement to finish second in the group stage and make the last four.

It's also been a great experience to captain the Hurricanes. Having played with most of the girls last year, I knew them all pretty well and the team has been an absolute pleasure to lead.

We seemed to love a close finish, and with a lot riding on each game you learn an awful lot when you're put in those high-pressure situations, win or lose. Having those experiences to draw upon going back into international cricket is brilliant and I'm sure the other England girls who played in the WBBL will be in the same boat.

Overall, it's been great for the women's game to bring some of the best players in the world together to play in the tournament, and hopefully it will push forward the standard of international cricket too.

It's brilliant that the Women's Cricket Super League will be starting back home in England this summer to continue this momentum. While the WBBL has to some extent benefited through piggybacking on the success of the men's BBL, it's exciting to see how a standalone women's competition will go in England.

It might end up taking slightly longer to develop the competition to the same scale as the WBBL, as the six hosts are effectively starting from scratch, but I'm certain that in time, the Super League will be just as successful.

Ultimately, it's massively exciting to see how the game develops in the next few years.

It's been great to "feed" off other international players during the WBBL - here's my Hurricanes team-mate Hayley Matthews. The West Indies batter is never to be seen without a packet of her favourite brand of crisps!

There is absolutely nothing which is less fun than staring at a wall from the depths of an ice bath - sadly a frequent occupational hazard for any professional cricketer. So when you get the opportunity to do your recovery in the sea at Sydney's iconic Bondi Beach instead, you jump at the chance.

We were doing just this after a training session when things got even better as we bumped into some of the lifeguards that patrol the beach, along with the TV crew that was following them for the show Bondi Rescue.

Obviously we challenged them to a game of beach cricket and had a pretty decent game, despite being interrupted a few times as they had to pop off to save a few tourists who had got into trouble in the sea. Thanks guys, ice baths will never be the same again.

Another bonus of being a professional cricketer, is that on occasion, you get the odd freebie and loving a good book, I was excited to hear that a Tasmanian author was a fan of the Hurricanes and had given us all a copy of her recent book.

Heading back to South Africa

The last and only time I toured South Africa was back in 2011 and we played all our games at Senwes Park in a small town called Potchefstroom. This time we're lucky enough to see a bit more of the country, including matches at the iconic grounds of Newlands and the Wanderers - definitely a couple to tick off any cricketer's bucket list.

I actually took my first international wicket back on that 2011 tour, bowling my old filthy seamers - I definitely didn't expect to come back to South Africa as a spinner five years later!

This is going to be a really important tour for us, the three ODIs are massive in terms of the ICC Women's Championship and qualification for the 2017 Women's World Cup in England, and the three T20 matches are the last games we will play before the World T20 in India in March.

BBC Radio will have commentary on all of England's ODI and T20 international matches in South Africa. Under a new rights deal announced on Monday, the BBC Sport website will show video highlights of ICC events for the next four years, including the World Twenty20 and Women's World Cup.