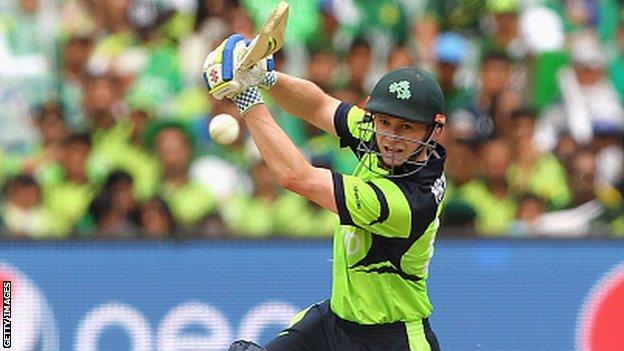 The World T20, which begins in India on Tuesday, is another opportunity for Ireland to prove their credentials on the big stage - and they are determined to seize it.

That means winning their four-team group and progressing to the Super 10 stage - anything less is failure.

Achieving their goal is no easy feat, because Bangladesh are firm favourites to top Group A while Oman and the Netherlands provide tricky opposition.

If they do reach the Super 10 then high-profile encounters against hosts India, Australia, Sri Lanka and Pakistan will follow.

And the Irish love nothing more than taking a big scalp in major tournaments.

Ireland possess two new weapons for the group games in Dharamsala - and both are in the bowling department.

The return of paceman Boyd Rankin to Irish colours after his 2012 switch to England provides a potent spearhead to their attack.

And Sri Lanka great Chaminda Vaas, who claimed 400 one-day wickets in a stellar career, has been drafted into the Irish set-up for the tournament.

Ireland skipper William Porterfield is delighted to have Rankin and Vaas on board for their Super 10 bid.

"It's great to have Boyd in the squad again and he has found it easy to fit back in - it's like he was never away," said the opener.

"Any team would like a 6ft 8in plus bowler performing the way he has been and Boyd's experience and professionalism is so beneficial to our younger bowlers.

"Chaminda's stats speak for themselves and the big advantage is his vast experience of playing in sub-continent conditions.

"He's also played here at Dharamsala in the IPL and his bowling is a similar pace to many of our own players.

"His advice is invaluable and we're delighted to have him in the camp going into Wednesday's opener against Oman."

Porterfield is a man in form, with an unbeaten 75 in Thursday's victory over Hong Kong followed by 31 against Zimbabwe in the final warm-up game on Saturday.

However, a six-wicket defeat against the Zimbabweans highlighted the challenge facing Porterfield and new coach John Bracewell.

Ireland are attempting to make the second phase of the World T20 for the first time since 2009 and Porterfield is clear on what is required.

"We need to win all three games, it's as simple as that," added the Warwickshire batsman.

"Oman are first up - they are no pushovers and it's a form of the game they really enjoy.

"Bangladesh are favourites but they lost to Hong Kong in the last World T20 while we were defeated by the Netherlands, so anyone can beat anyone.

"Getting to the Super 10 stage in Bangalore and Calcutta is all we're talking about, it's our sole focus and we are determined to get there."