It only seems moments ago we were putting away the Christmas decorations and seeing in the new year.

But spring is just about here and the new County Championship cricket season is within touching distance.

Before it gets under way on Sunday, BBC Sport takes a look at how things are shaping up for 2016.

Three in a row for Yorkshire?

Yorkshire have forgotten what losing is like in recent seasons. With only one defeat in each of their title-winning campaigns in 2014 and 2015, the most successful team in English cricketing history appear to be streets ahead of their rivals. So can anyone stop the White Rose making it three in a row?

"The 2015 season will be remembered for Yorkshire's domination of the Championship. A record points haul, with just one defeat all season and a series of emphatic victories.

"It is difficult to see another county stopping Jason Gillespie's talented outfit.

"Yorkshire have recruited all-rounder David Willey from Northants to reinforce a seam-bowling attack that was the best in the country during the past two seasons. Their overseas players arrive later in the campaign and in Kane Williamson and the exciting Travis Head they have the ideal combination of experience and promise.

"A further boost for the champions is the availability of their England players for the first three games of the season.

"So it all points to another title arriving at Headingley. However, others will want to bring Yorkshire down and Warwickshire, with Ian Bell in their ranks, might pose the main threat."

PREDICTION: A much closer title race, but Yorkshire to make it three on the trot.

The young South Africa paceman has enjoyed a remarkable rise to international stardom over the past six months, with devastating spells of quick bowling.

Aged just 20, Rabada was the top wicket-taker in the winter Test series against England, picking up 22 wickets at an average of 21.90 in three matches.

He is eligible for six T20 Blast matches, two Championship games and one One-Day Cup fixture in June and July.

Having finished bottom of Division Two for the past three seasons, Leicestershire have made something of a statement over the winter with a trio of experienced signings, topped by former Middlesex captain Neil Dexter.

The 31-year-old has more than 6,000 first-class runs and also takes plenty of wickets with his medium pacers.

He will join Paul Horton (Lancashire) and Mark Pettini (Essex) in the Foxes batting line-up.

The tall left-arm seamer said his decision to leave Essex and join Hampshire was "a career move to try to better myself".

Topley, 22, is often seen as a limited-overs specialist, but his record suggests he can bring something to the four-day game as well. 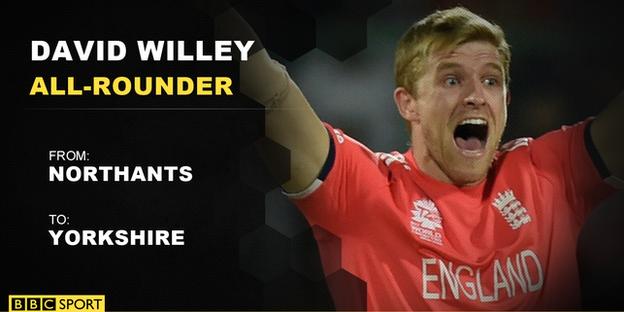 Arguably the most high-profile signing during the close-season, Willey adds to Yorkshire's already impressive pool of all-rounders.

However, fitting the 26-year-old into a seemingly settled side may prove tricky.

"He faces a challenge to get a permanent spot in the Yorkshire Championship side," says Callaghan.

"When all the battery of pacemen are fit, Yorkshire have seven contenders for four positions. So where will Willey fit in?

"In the Championship, he will be part of the rotation policy employed by coach Jason Gillespie and, with fellow left-armer Ryan Sidebottom at the club, it might be a case of sharing the workload for Willey."

The visiting captain will now be offered the opportunity of bowling first. If he declines, the toss will take place as normal, but if he accepts there will be no toss.

The change is effective in both divisions and aims to encourage better pitches in four-day cricket with more assistance for spinners.

However, it is only a trial and a decision on whether or not to extend it will be taken at the end of the season.

Only one team will be promoted from Division Two of the County Championship this summer in order to reduce the number of top-tier teams in 2017.

A top division of eight teams will be introduced next year, down from nine, with 10 counties in the second.

Players in the England Test reckoning?

The 22-year-old opener has been touted for international honours since he was a teenager - and big things are expected of Bell-Drummond this season.

He's already found form with the bat in Kent's warm-up match against Loughborough University - hitting his highest first-class score of 206 not out.

The Hampshire batsman is one of the most natural timers of the ball in county cricket and was recently a part of England's World Twenty20 squad.

The 25-year-old struggled for runs at the start of the 2015 season, but found some form later in the summer and will surely be pushing for a place in England's middle-order should the likes of Nick Compton or James Taylor struggle.

The England opener debate is unlikely to go away any time soon, with Alex Hales only averaging 17 in four Test matches.

Lees, 22, has been earmarked by Geoffrey Boycott and Michael Vaughan for England selection and another good season as part of a strong Yorkshire side could push him into the reckoning.

Unused on England's tour of South Africa, Mark Footitt may finally get his chance this summer. The left-armer regularly clocks 90mph and a move to Surrey from Derbyshire over the winter means he will be playing Division One cricket.

Surrey captain Gareth Batty believes the 30-year-old has what it takes to earn his first Test cap.

"He has to be the next cab off the rank, for want of a better expression," said Batty. "He has got everything. He has pace, he swings it both ways and he knows what he is doing. What more do you need?

"He just needs a chance. Will they give him a chance? I hope for him they do because he has the best part of 80 wickets for the past two seasons."

A look at Division Two

"As ever, depth of squad, rather than talent, may be the deciding issue. Neither of the counties relegated from Division One look unbeatable, though a seam attack of Chris Jordan, Ajmal Shahzad and Steve Magoffin should ensure pre-season favourites Sussex won't be short of wickets.

"Worcestershire, who have added the New Zealand quick bowler Matt Henry to a squad that looked increasingly competitive in Division One last season, will also be strong.

"Kent have a nice balance of experience and flowering talent, Essex and Glamorgan will both expect to benefit from new coaching regimes, while the confidence of Gloucestershire's small but talented young squad can only have been boosted by winning the One-Day Cup last year. 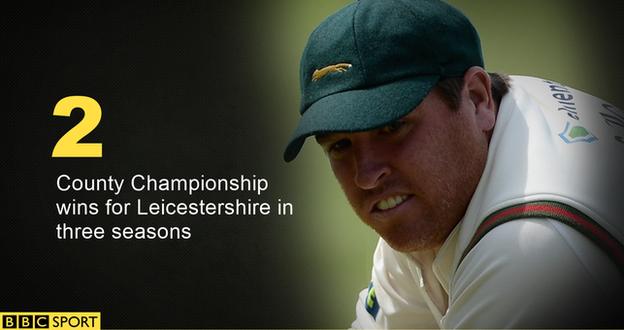 "And it's more than time for one of the East Midlands counties to produce a side that wins more games than it loses. Derbyshire and Leicestershire have moved to strengthen their batting, but the Peakites may struggle to overcome the loss of Mark Footitt to Surrey.

"With Northants similarly hit by the loss of David Willey to Yorkshire, it may be the Foxes, with Clint McKay returning, who offer a more consistent challenge.

"The feeling is Surrey and Lancashire's promotion has levelled the Division Two playing field, and most of the counties therein will start the season believing they can fight for the title - and the single promotion place available."