Pakistan were knocked out of the World Twenty20 as Australia kept their hopes of reaching the semi-finals alive with victory in Mohali.

After Steve Smith inspired Australia to 193-4, Shahid Afridi's side needed to pull off their highest chase in a T20.

Khalid Latif led the charge with 46 but James Faulkner took four of his five wickets from six late balls as Pakistan finished on 172-8.

The Aussies must now beat India on Sunday to reach the knockout stage.

Even a win for Pakistan, who suffered a third defeat in four matches, would have seen them relying on Australia to qualify.

Had they won, a narrow Australia win against India would have sent them through instead of the Aussies by virtue of their superior run-rate. 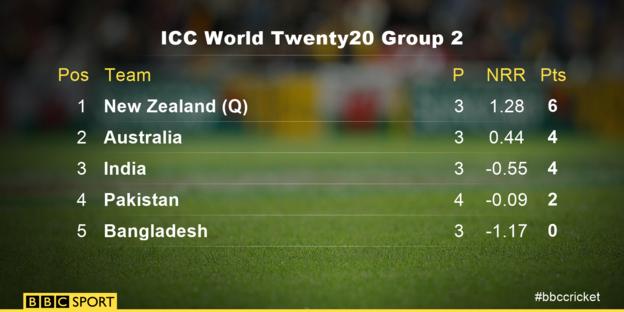 Unbeaten New Zealand, who play their last game against Bangladesh on Sunday, have already qualified from Group 2.

Pakistan made the semi-finals of the first four World T20s, but have now been eliminated from the group stage at the last two.

It was right-armer Faulkner who did for them, becoming just the sixth man to take a five-for in T20 internationals with four late wickets, having earlier dismissed the dangerous-looking Sharjeel Khan.

His figures of 5-27 are the fifth best at the World T20, the best by an Australian in any T20 game, and he twice had the chance to claim a hat-trick.

Was Afridi's 'goodbye' the turning point?

The 36-year-old Afridi may well have been playing his last match for Pakistan, having already retired from all other forms of the international game.

He came in to bat with his side still in with a chance on 85-3, requiring 109 with 57 balls, but there was to be no fairytale captain's innings.

He was stumped playing a loose swipe having made 14 from 7 balls, and whereas Australia accelerated strongly at the end of their innings, expertly guided by Smith and Shane Watson, Pakistan failed to maintain any late momentum.

"When I go back I will take a decision and whatever is better for the country I will go with that," Afridi said of rumours of his retirement.

"Let's see how things are doing, I will announce this in my country. As a player I am fine but as a captain it is hard being captain of Pakistan with the pressure, media pressure and expectancy."

Smith plays the shot of the day

Australia captain Smith displayed stunning range and versatility for his unbeaten 61 scored with eight fours and no sixes.

The highlight was surely when he went way wide, leaving his wicket totally exposed, hitting an audacious scoop to the boundary for what was without a doubt the best shot of the match.

What the skippers said:

Pakistan captain Shahid Afridi: ""I want to congratulate Australia but we are not good enough, the last four overs we gave 40 runs away and you cannot do that against a world class side."

Australia captain Steve Smith: "We haven't quite played to our potential in the first two games. Today was quite a clinical performance and I'm really proud of the boys.

"We just have to keep on winning. There's three more games if we want to win the World Cup. India will be tough. Hopefully we can keep playing some good cricket and give them a run for their money."