West Indies edged past South Africa by three wickets in Nagpur to reach the World Twenty20 semi-finals and smooth England's path to the last four.

Chasing 123, West Indies needed nine from the final over, but a six from Carlos Brathwaite allowed Denesh Ramdin to seal it with two balls left.

Chris Gayle earlier took 2-17 with his off-breaks as South Africa struggled to 122-8 on a slow pitch.

England will reach the semi-finals if they beat Sri Lanka on Saturday.

West Indies, winners in 2012, are likely to meet India or Australia in the last four in Delhi on Thursday. 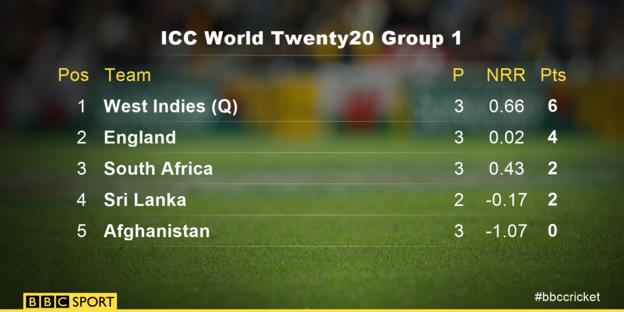 After India beat Bangladesh off the final ball in the men's tournament and England did the same to West Indies in the women's, the World T20 had its third thrilling finish in as many days.

West Indies needed 24 at a run a ball with six wickets in hand, only for Imran Tahir to have Andre Russell caught at deep mid-wicket and then, from the next delivery, bowl Darren Sammy with a googly.

Marlon Samuels, who made 44, remained, but he holed out with 10 still required from seven deliveries.

Brathwaite, though, swiped Kagiso Rabada's second ball of the final over into the crowd, leaving Ramdin to hit the winning run off a cut that just slipped through the fingers of a leaping Hashim Amla.

Although Gayle would go on to be bowled by Rabada from the second ball he faced, the two wickets he took were part of a South African slide to 47-5 that ultimately cost them victory.

By the time Gayle, who had bowled only once in T20 internationals since 2012, was brought on in the third over, Amla had been run out out in a mix-up with Quinton De Kock and Faf du Plessis had chipped Russell to mid-off.

Gayle encouraged Rilee Rossouw to slice to point, then bowled David Miller, dancing in celebration either side of AB de Villiers being deceived by a Dwayne Bravo slower ball.

West Indies and their skipper Sammy expertly exploited the conditions, while South Africa needed De Kock's patient 47 and some late impetus from David Wiese and Chris Morris to stay competitive.

West Indies captain Darren Sammy: "With two left-handers at the crease we backed Chris [Gayle] to do it, we started off really well.

"Today we were under pressure chasing a low total but the team responded. It was a tough win and tough wins don't really come often for us so we are really going to celebrate this."

South Africa captain Faf du Plessis: "It was a good effort to get it so close towards the end, a great fight by the boys, but this game makes us all old very quickly. West Indies were just a bit better than us today.

"It's not so much a party for us tonight. We will be looking at the other results. We didn't play at our best and when you're not at your best you can't expect to be going through to the semi-finals."