Virat Kohli's brilliant unbeaten 82 led hosts India to a six-wicket victory over Australia and a place in the semi-finals of the World Twenty20.

Kohli expertly marshalled a chase of 161, taking 32 runs from the last 11 balls he faced to allow MS Dhoni to win it with five balls to spare in Mohali.

Earlier, Australia raced to 50 from only 22 deliveries but were dragged back to 160-6.

India will meet West Indies in the last four in Mumbai on Thursday.

Australia go out, ending the international career of Shane Watson, who announced his retirement on Thursday. 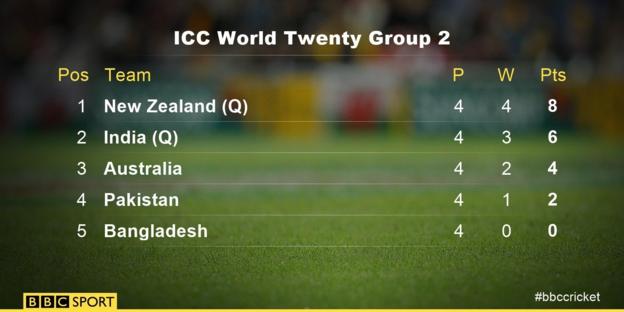 Classy Kohli does it again

Kohli is a master of the run chase - the right-hander averages 91.80 in the second innings of T20 internationals.

Steady Indian progress and the regular fall of wickets left the hosts needing 39 from three overs, the required rate higher than any other point in the innings.

Until then, Kohli had mainly settled for manoeuvring the ball and running hard, but launched his attack on James Faulkner, taking a boundary square either side then carving a six over long-off.

Twenty were still needed from two overs, only for Kohli to drive, pull and slap four boundaries from the next over delivered by Nathan Coulter-Nile.

All that was left was for skipper Dhoni to hit the winning boundary off Faulkner and, in the end, it was not close.

For a time at the beginning of their innings, Australia looked set to move out of sight as Usman Khawaja and Aaron Finch punished the wayward bowling of Jasprit Bumrah and Ravichandran Ashwin.

But, after Ashish Nehra had Khawaja caught behind, India clawed their way back into the contest through the left-arm spin of Ravi Jadeja and Yuvraj Singh, though Australia will be aggrieved at the decision to give captain Steve Smith caught behind off Yuvraj

Glenn Maxwell was bowled by a slower ball from the returning Bumrah just as he was beginning to look dangerous and the late acceleration did not materialise.

Peter Nevill did take 10 from the last two balls of the innings, the only two he faced, but it was not enough.

India peaking at the right time?

India began the tournament as huge favourites to become the first host nation to win the World T20, but were beaten by New Zealand in their opening match.

They then needed a remarkable last-ball victory against Bangladesh, who needed only two runs from three deliveries, to stay in the competition.

However, this was their most impressive display so far and, with Kohli in supreme form, they will again be heavily fancied to add to their triumph in the inaugural tournament of 2007.

Peaking at the right time has been vital in previous World T20s - no team has ever gone unbeaten - and India may be doing just that.

Man of the match Virat Kohli: "This is what you play cricket for. I'm overwhelmed. It was a quarter-final for us, a lot was riding on us playing at home, and with the crowd you want to give them as much entertainment as possible. The positive energy from the people helps push you through."

India captain MS Dhoni: "Kohli has been playing brilliantly over the last three, four years. Every day when you play a big innings you want to improve and learn and that is what he has done. He's very hungry to score runs for the team, but other batsmen will now have to step up - we cannot rely on one. He will feel the pressure slightly less that way. Still we feel we need to step up in our batting."

Australia captain Steve Smith: "I thought 160 was probably around par. It took an incredible innings from Kohli to get India over the line. Batting like that under pressure - he's done it for a long time and he played beautifully again."