England in a World Cup final? You'd better believe it.

But what are the key battles when Eoin Morgan's men line up against West Indies in Sunday's World Twenty20 final in Kolkata?

BBC Sport pitches five of England's best against five of the biggest sporting heroes in the Caribbean. Let's start with the six-hitting superstars...

If you call yourself the Universe Boss, then you've got to back it up with your actions. Otherwise you're as much use as a Sunday league footballer with neon yellow boots.

Chris Gayle's T20 stats are incredible. Breathe this lot in:

How do you stop him?

"Bowl off-spin at him and run the ball into his pads - it always worked for me," says former England spinner Graeme Swann.

Jos Buttler's good too, though. He is one of only six players (Gayle being one of the others) to average above 50 in the tournament with a run tally in excess of 100.

He hits it hard, long and in places of the ground where cows used to be able to graze. The ultimate 360-degree batsman.

"Jos Buttler is the player the opposition fear most," says BBC cricket correspondent Jonathan Agnew. "He could become a huge star in India with his performances in this tournament and for Mumbai Indians in the IPL."

Joe Root, cricketing superstar. There's nothing else to add, surely?

Only three players have scored more runs than England's number three in the tournament, with his stunning 83 the cornerstone of his side's record run-chase against South Africa in the group phase.

What Root lacks in brute power, he more than makes up for in ability and intelligence.

"Joe's never fazed by anything when he goes out to bat," said Swann.

"He's like a puppy dog - he's got boundless energy and it's wonderful to see he's got three lions on his shirt."

But what about Lendl Simmons? He was parachuted in by West Indies for his first appearance in the semi-final against India.

The result was a match-winning 82 off 51 balls. Talk about making an entrance to the party - he smashed down the back door and started swigging the hosts' champagne. Kind of. 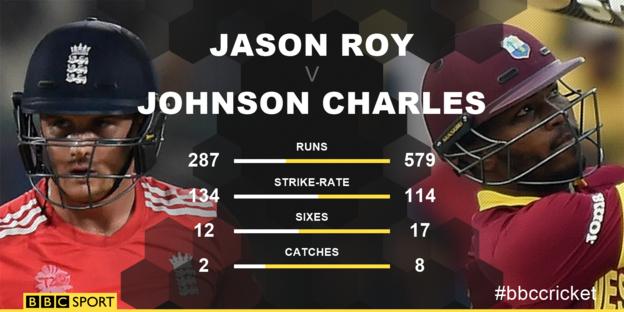 A fast start is important in T20 cricket - and both Jason Roy and Johnson Charles hit fifth gear before they've even turned the sat nav on.

Roy's strike-rate in England's sensational run-chase against South Africa was 269 (he scored 43 off 16 balls) and his 11 fours in the semi-final victory over New Zealand are a joint tournament high.

"Jason's a fine player," observes Swann, who won the tournament with England in 2010. "One criticism that T20 cricket gets is that people slog in it - they don't.

"There are very few slogging batsmen around the world. Roy definitely does play some good shots and he's got the raw power to go with it."

Charles has previous against England in this competition - he walloped 84 off 56 balls against them in 2012 and tops the Windies' run-scoring charts in this tournament.

Others might take the glory but without Roy and Charles it might have been a different story for both teams.

The job of captaining West Indies can be a tricky one, when you take into account all the politics of leading a team made up of players from a large group of culturally diverse countries.

But the smiling assassin Darren Sammy does it well. Almost like a modern-day Clive Lloyd.

Measure his contribution in runs (six) and wickets (one) in this tournament, and he falls short but, as Test Match Special's Vic Marks says, he is "gold dust" to this team.

"Anyone that can bring together the disparate band of renegades that the West Indies are these days is doing a great job," adds Swann.

Eoin Morgan, an Irishman who leads England, has also had a lean tournament but few have questioned his leadership or ability with the bat.

"If Joe Root is like a puppy dog then Eoin Morgan is like a little terrier," said Swann. "He's just tenacious, will never say die and is always ready to have a go at the opposition, he's brilliant."

We've established both teams have some tasty batsmen, but what about the bowlers?

Look after the boundaries and the trophy will take care of itself.

England have the worst bowling economy rate of all the teams to reach the Super 10s stage, yet in Chris Jordan they have a man who has delivered 48 dot balls in the competition.

"England have been crying out for a yorker bowler as long as I can remember - and now they've got one," says Test Match Special commentator Charles Dagnall.

Backing up Jordan rather nicely is strapping all-rounder Ben Stokes, who averages a dot ball every two deliveries in the death overs (16-20).

But then there's Samuel Badree, the West Indies leg-spinner who leads the way when it comes to dot balls (54).

And Dwayne Bravo who, when he's not shooting music videos or dancing spectacularly well in viral clips, has more bowling variations than Penn and Teller have magic tricks.

As Vic Marks notes, Bravo "never bowls much above 70mph - but the batsman always thinks he might".

And finally, the weather forecast for Sunday...