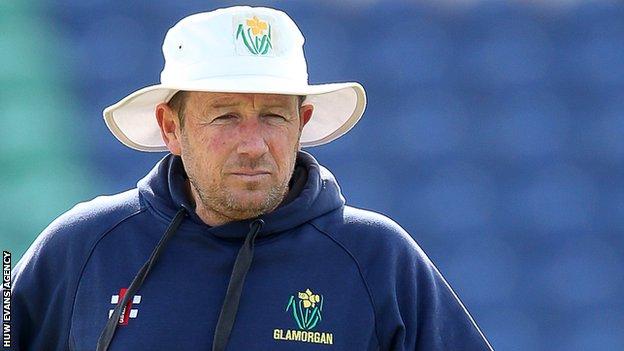 The county's rain-hit Championship match against Worcestershire in Cardiff saw no play on the last two days.

They have now drawn two and lost two of their first four games.

"It hasn't gone the way we'd hoped," BBC Wales Sport. "But the work that every player's putting in is exceptional."

He added: "The environment is upbeat, you'd expect it to be a little bit more downbeat really, but no.

"The boys understand to a man we haven't reached our potential so far."

Glamorgan were were unbeaten in eight Championship matches at the start of the 2015 campaign, but Croft says comparisons should not be made.

"Don't compare it with the first half of last season. I think you have to look at how the second half was and sadly we've continued that form.

"I've got belief in these boys, they're practising hard and with that type of work ethic and attention to detail, you just hope things come right."

The county made three changes for the Worcestershire game, but that failed to bring about an improvement from the defeat against Kent, with the visitors racking up 456- 6 declared before reducing Glamorgan to 42-4.

"The umpires thought we were highly unlucky with the way we bowled in the first two sessions, but we weren't capable of sustaining it for three sessions - then you get on a bit of a roll, we lost three quick wickets and the captain's wicket (Jacques Rudolph being run-out) was a bit of a freak" said Croft. "But nothing gets glossed over."

Glamorgan are likely to choose between playing spinner Andrew Salter or batsman Nick Selman in the next game away to Gloucestershire, starting on Sunday 15 May.

South Africa batsman Colin Ingram is not expected to feature in the trip to Bristol or the following home game against Essex because of his knee injury, with the club still targeting the T20 Blast opener away to Surrey on 25 May for his return.