Throughout his playing career, any off-season for Graeme Fowler used to begin in the same way - the door would be locked, the curtains shut and the phone taken off the hook.

The former Lancashire, Durham and England batsman thought nothing of it. It was his way of recharging the batteries.

However, the 59-year-old now believes that it was a pre-cursor to his depression diagnosis. Ten years after he retired from playing the signs started to appear again.

"Everything was perfect. I had a wife, children and a job," Fowler told BBC Radio Tees as part of Mental Health Awareness Week. "But in December 2006 my wife told me I needed to go to the doctor."

Fowler, who has previously formed part of the BBC Test Match Special team, was diagnosed with clinical depression.

It was something his daughter Georgina had also picked up on, noticing he repeatedly spent his days in the conservatory reading the same magazine. "I did not realise I had disconnected from everyone," Fowler said.

"There was no trigger, it absolutely floored me. But then you start your journey to get back to normal - whatever that is. 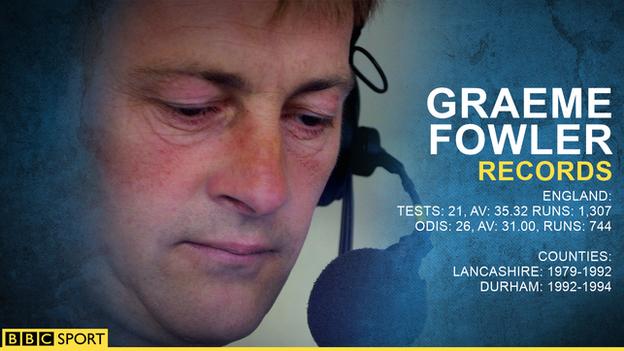 "It shut me down. I'd lie on the sofa and stare out of the window. I couldn't do anything. It was awkward for the children too."

His lightbulb moment came in creating a scale. "One day I came up with this scale from zero to 20," he added. "10 was neutral. If the number was less then I was unwell, if it was higher then I was happy to play with the children. It was an instant way of communication.

The Lancastrian, who now lives in County Durham, also said social media had been an important part of his recovery.

"I used to rant on Twitter. But then people were coming back with messages of support and it has been a massive influence," he said. "If used in the right way it can be very supportive and a lot of fun as well."

The batsman, who scored 1,307 Test runs for England between 1982 and 1985 - including the first-ever double century by an Englishman on Indian soil, says cricket is "way ahead" of other sports when dealing with mental health issues.

"Cricket encourages people to be open, honest and to deal with it," he said. "A lot of other sports don't really acknowledge it, they are frightened and it's easier to shove it in a cupboard. By being honest people come round."

Marcus Trescothick, Michael Yardy and Jonathan Trott have suffered with high-profile cases of mental illness during their careers.

The first two years after retirement is the most difficult time for players, according to the Professional Cricketers Association.

"In sport you get physical injuries, you get the diagnosis, the treatment and the rehabilitation to get you playing again," Fowler added.

"Cricket is a mental game, but how much welfare is there? Well, it's pretty good, that's why you hear about it more than any other sport.

He continues to raise awareness for cricketers and sports people by telling them to notice the signs.

"You can tell if their behaviour changes drastically," he said. "Just ask 'are you alright?' It could be anything, but if they say they are not feeling great, there is no shame attached. Deal with it because you'll get back on track."

The PCA and mental health

Alongside the England and Wales Cricket Board, the PCA ensures it closely monitors the well-being of it's members. This month it released the "Personal Development and Welfare Programme" - an 80-page document that looks more closely at mental health and support available.

"We've been very fortunate ever since Marcus came out to speak openly about his illness," he said. "His high profile encouraged others to talk about it as soon as possible. Cricket is supportive and most of its initiatives come from Marcus."

"We've got a network and helpline. It's an ongoing initiative but if we get it right then it means, even right down to county level, we can get to people quickly," he added.

"We are well armed, we've just got exercise the plans and use this great infrastructure we have."

You can hear the full interview with Graeme Fowler on the BBC Tees website.