Joe Root struck a measured 93 as England completed a 3-0 series win over Sri Lanka with a 122-run victory in the fifth one-day international at Cardiff.

Sri Lanka are still without a win against England on this tour, with only Tuesday's Twenty20 remaining.

England move above Sri Lanka to fifth in the International Cricket Council rankings, and look a different side to the one that exited last year's World Cup at the group stages.

James Vince, who struggled in the Test series against the same opposition, did well to make a maiden ODI half-century but threw his wicket away when trying to cut loose off the spin of Danushka Gunathilaka, who took 3-48.

In the run chase, Gunathilaka's 48 proved useful after some early wickets, but after his dismissal to Plunkett only Dinesh Chandimal could provide some resistance with 53 until he was bowled by Willey.

On a pitch that had looked to favour seam bowling, spinner Adil Rashid picked up 2-41 in 10 overs, and Willey returned late on with two 41st-over wickets before sealing victory in his next.

Man of the match Buttler's reputation for lower-order hitting served him well, in the cause of boosting England's run rate.

The hosts were on 227-4 after 40 overs, and with Root, who faced 106 balls, playing a relatively pedestrian innings, Buttler provided the impetus with a strike rate of 156.

The Lancashire man pulled out the novelty shots, taking four fours off Nuwan Pradeep, and also ran well between the wickets during his 14.2-over alliance with Root.

The hosts have had a very productive one-day series, despite the stumbles in the tied opener at Trent Bridge.

Leading scorer Jason Roy scored 316 runs, including two centuries - he was named man of the series - while Plunkett, Willey and Adil Rashid excelled well with the ball.

England can now look ahead to the visit of Pakistan - the Test series starts on 14 July and the ODI series on 18 August - with confidence. 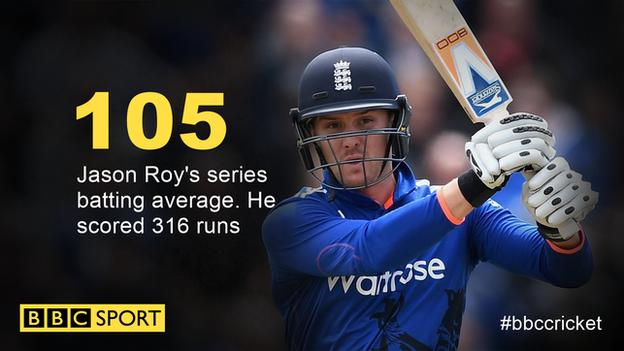 'Outstanding belief' - what they said

"The belief in the changing room has been outstanding. Jason Roy, Alex Hales, Joe Buttler, Joe Root - everybody has contributed with the bat apart from myself.

"We've got better throughout the series but we've grown together and got closer as a side."

Man of the match Jos Buttler: "Today was a really ruthless performance. It was good to contribute to a good performance and a fitting end to the series."

Sri Lanka captain Angelo Mathews: "We've been having the same problems over the last five weeks. Either batting, bowling or fielding has let us down.

"We needed a perfect performance to beat England but they played very well."