A Lord's crowd is not much inclined towards heckling. Visiting centurions get standing ovations. Champagne corks can land on the outfield to convivial cheers; disapproval is marked by gentle sighs and the sound of newspapers being purposefully refolded.

So it was unlikely Mohammad Amir's return to Test cricket, six years after he was banned from the game for his part in a spot-fixing scandal, would be greeted by blockades of the Grace Gate or scorecards being burned in the Coronation Garden.

Yet we expected something. Former England captain Michael Vaughan spoke for many ex-players when he said Amir should never have been offered a second chance. Lord's presents itself as the spiritual home of cricket. Spot-fixing is the dirty underbelly, the ghost at the corporate feast.

After a first day tucked away in the dressing room, Amir's moment came just after 11:30 BST, when Chris Woakes bowled Wahab Riaz to leave Pakistan 310-8 in their first innings. Through the Long Room, helmet on, clattering down the pavilion steps, all ears cocked.

Applause. Not a congratulatory applause, not a sarcastic one, just exactly the welcome you'd expect for a number nine: polite, involuntary, almost disinterested. No boos, no jeers.

To the crease. First ball to be bowled by Stuart Broad, a man unlikely to forget even if he had forgiven. It was Broad whose highest Test score in the preceding Test six summers ago was left overshadowed by the scandal that followed, Broad who watched in disbelief with his friend James Anderson as the revelations broke across the media late that August night.

First ball, edged past his own leg stump for four. Ironic cheers, standard for such a shot.

Second ball, short, ducked into, glancing off the helmet. A few 'oohs', a little smile from the bowler. No words exchanged, no bloodthirsty roars from the packed grandstands.

Amir's first match back, after his five-year exclusion and a six-month custodial sentence, could have come anywhere. That it has fallen at Lord's, the same ground where he deliberately bowled those three no-balls, initially appeared the ugliest of auguries.

Given the new ball at the start of England's reply, he even marked out exactly the same approach from the same end as he had in 2010. Pavilion End, over the wicket, left-handed opening batsman facing. 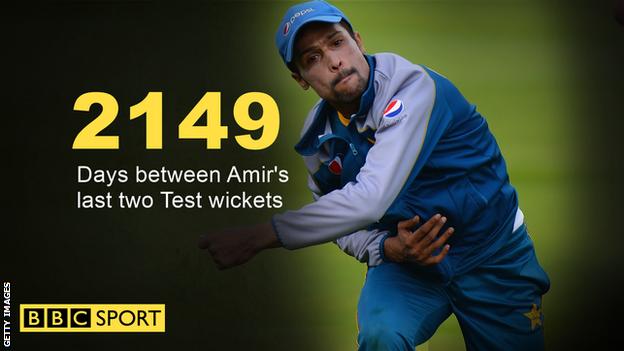 You thought back to the treatment dished out by other English crowds on other days to bigger names - Brett Lee, taunted by the Barmy Army at Adelaide in 2006, Mitchell Johnson, mocked relentlessly across his own continent in the following Ashes series and abused mercilessly when he returned to England for the Ashes of 2015.

Instead, just one or two wags yelled out the obvious response as he whirred in for his first delivery. Had we been at Headingley on a beery Saturday, or Edgbaston with the Hollies Stand in full fancy-dress, it may have been very different, a chorus of no-balls rather than isolated solos.

Not at Lord's. Perhaps some felt Amir, just 18 at the time, was as much victim as perpetrator, unduly influenced by his captain Salman Butt and more experienced new-ball partner Mohammad Asif. Perhaps others felt the crime had already been followed by sufficient punishment. Feltham Young Offenders Institute, where Amir served three months after his criminal conviction, is no-one's idea of a finishing school for promising young swing bowlers.

Possibly there was even a little indifference. Six years is a long time, even in a sport as rooted in storied past as cricket. That the sport owes some of its early growth in this country to the gambling predilections of wealthy landowners and the subsequent matches they staged will not have been lost on the historians in the ground.

Maybe the hold of the contest took over, for soon Amir's allure became much as it was before that scandal detonated here: a bowler of considerable skill and much easy grace, testing the best batsmen England can find, offering consistent threat and constant entertainment.

With England 38-1 he induced a classic left-armer's edge from captain Alastair Cook, only to see Mohammad Hafeez make a horrible clatter of the attempted catch at first slip. Straining for revenge, he allowed England to accelerate to their fastest first-innings Test 50 in 26 years. With Cook on 55, he had him dropped again, this time by his wicketkeeper Sarfraz Ahmed.

Six overs before lunch, two after, a spell of 0-35. Never dull, all about the cricket.

As warm afternoon drifted into grey evening, Cook cantering past landmarks as he habitually does - first England captain to score 4,000 Test runs, most runs in history scored as a Test opener - the story seemed to be about other men on this famous old field.

Amir may have been part of an attack featuring three left-arm quicks, but it was the leg-spin of Yasir Shah that was doing the damage: Joe Root suckered in, James Vince prised out, poor Gary Ballance left flat-footed and stiff-armed.

And then the little explosion of joy: Cook, cruising towards another century, tempted into driving at a full one that started wide, foxed by a little late swing and cleaned up off the inside edge.

Amir raced past the splayed stumps and into the embrace of his slip cordon, arms outstretched, eyes wide.

Six years of waiting will do that to you. And even those who did not want to see him here, even those who resent the damage wrought to the game they love by his actions and those of his former team-mates, could not deny the young man's emotion.